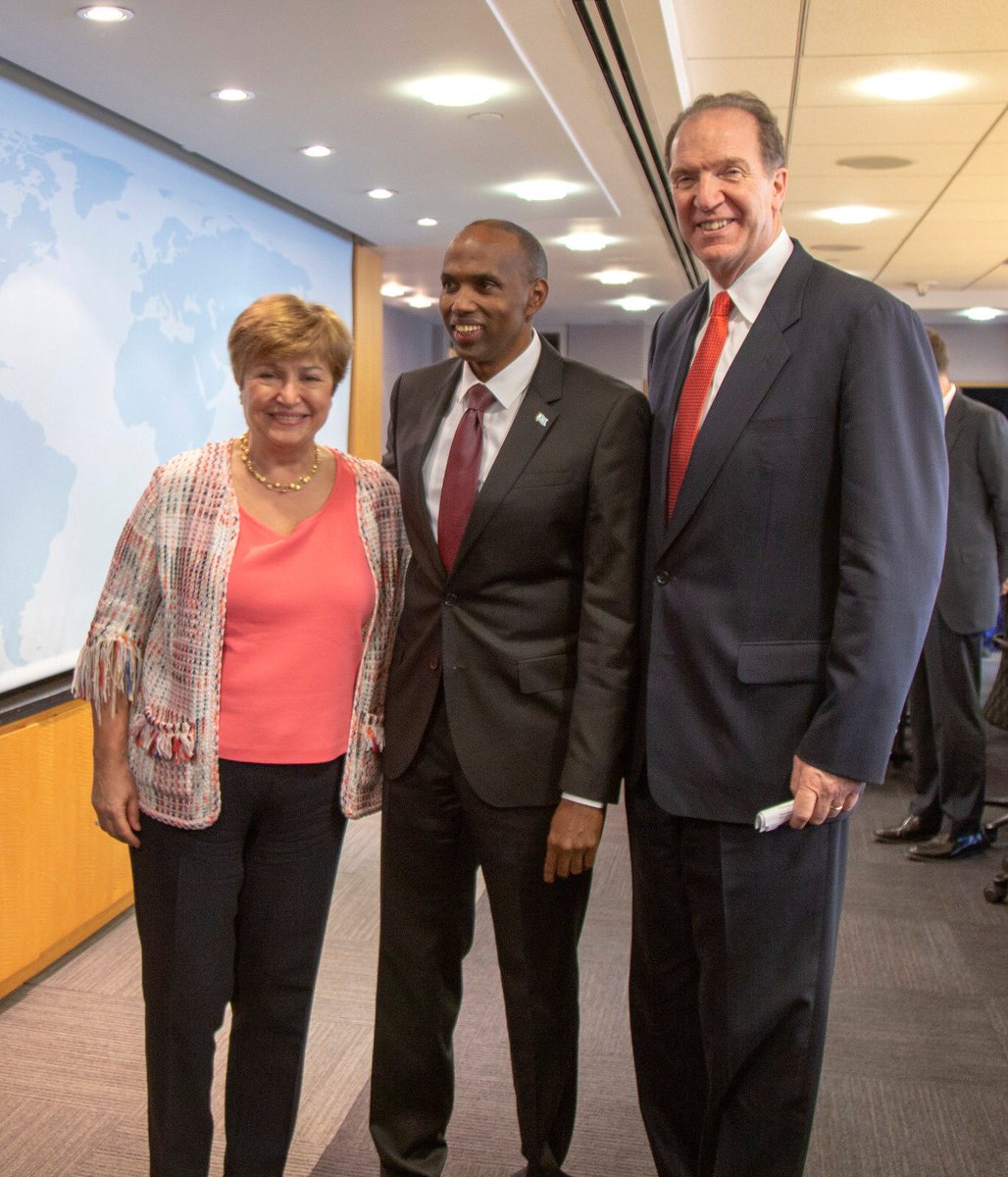 HERE ARE THE ANSWERS OF YOUR [Michael Rubin] 10 QUESTIONS

Somali Prime Minister Hassan Ali Khaire visited Washington and met with the World Bank, senior officials from the State Department and other high-profile US officials (IMF Press Release Aprill 11, 2019). Instead of questions, these are the reactions from the visit of the man you called former refugee from Norway.

Statement from USAID: On April 11, U.S. Agency for International Development (USAID) Administrator Mark Green met with the Somali Prime Minister, His Excellency Hassan Ali Khayre. They discussed Somalia’s efforts to mobilize greater domestic revenue; important legislation pending in the Somali Parliament, including bills regarding elections and the Auditor General; and how USAID will continue to harness the dynamism of Somalia’s private sector and its vast potential for economic growth, through education, the management of natural resources, and the creation of employment (USAID Aprill 11, 2019)

The national security advisor John Bolton tweeted “Pleased to have hosted Somali PM Khayre today. I congratulated him on Somalia’s economic reforms and urged sustained engagement on this front. We discussed ways to deepen the strong US-Somalia partnership on critical issues, including counter terrorism and regional stability,(CNN – April 10, 2019).”

If I were a lobbyist, I would have created much constructive questions than these simple ones (Washington Examiner – April 8, 2019). Here are the answers.

1. Why should Somalia receive any more international assistance?

Somalis are Humans that have universal right to receive assistance due the situations they have been experiencing for so long not only proxy, civil wars but climate change which caused heightened risk of drought in the country, according to state department, “The United States has provided more than $3 billion in humanitarian assistance for Somalia since fiscal year 2006 to address the problems of drought, famine, and refugees. Since 2011, the United States has provided an additional $253 million in development assistance to support economic, political, and social sectors to achieve greater stability, establish a formal economy, obtain access to basic services, and attain representation through legitimate, credible governance”. The Ambassador to Somalia has already answered to this question please refer to his answer for reference (Senate Committee on FR – August 23, 2018). Here was his answer again. In testimony to the Senate Committee on Foreign Relations last summer, US ambassador to Somalia Yamamoto said, “he would, as ambassador, strengthen institutions and governance; shift security responsibilities from AMISOM, the African Union’s peacekeeping mission in Somalia to Somali forces; build economic opportunities, particularly for Somalia’s young labor force; and address humanitarian food and health crises”.

Recently, US also mentioned giving more funds “To create a better tomorrow for the people of Somalia, the United States is committed to providing more than $900 million in critical investment”. Due to the international support, Somalia is improving both politically, financially and general security. Al-shabaab has lost all their strategic holds and now in hide-outs. US, AMISOM, SNA and other international partners are working hard to end the threat of Al-Shabaab.

2. Why are salaries in Mogadishu so high?

al-Shabaab has increasingly prioritized conducting asymmetrical attacks on Mogadishu, from 2012 – 2016, 19 members of parliament were killed in Mogadishu, ministers and other high-profile officials were also killed in Mogadishu. suicide bombing caused by vehicle-borne improvised explosive devices have also been taking place mainly on government-controlled areas in Mogadishu. Those who are serving in Mogadishu are putting their Lives on the line. A police officer in the streets of Mogadishu gets $100 a month (The Global Observatory – January 2017 ), I hope this is not a high salary.

3. What’s the plan to address corruption?

the Federal Government of Somalia announced a series of steps to strengthen its commitment to combat corruption and reinforce transparency to build more accountable institutions.

First day chosen Hassan Ali-Khaire, said he is mobilizing his government to tackle corruption and vowed to make the fight against misconduct and a non-negotiable principle in his administration. Compared to before a lot has been done. Although very few, those found of corruption were arrested and convicted. The government of Somalia has zero policy on corruption and have a clear strategy to combat any corruption (UNSOM – December 9, 2018).

4. Why does Farmajo travel so much?

Theodore Roosevelt, William Howard Taft, Warren G. Harding, and Calvin Coolidge made 1 journey abroad each during their presidencies While George W. Bush made 48 trips and Obama 52 international trips.  There are legitimate and justifiable reasons as to why presidents travel. For the case of Somalia, the country has been away from the world stage for so long, president Farmajo mostly travels to connect back the diplomatic relations with other nations. Mostly President and prime-minster gets official state invitations and that might be why they frequently travel.

5. Will Somalia survive the end of AMISOM?

Somali has been existing as a nation since the name “Somalia” was invented, Somalia will survive at the end of AMISOM exit because Security sector reform is going on following the national security architecture such as military, police, and justice sector. Due to the continuous US drone strikes to Al-shabaab, AMISOM and SNA rooted Al-shabaab out of all major cities.   After meeting with David Norquist, US Under Secretary for Defense, Prime minter Khaire tweeted “I expressed immense gratitude for America’s role in the war on terror. Discussed how we can enhance our partnership in the security sector reform to enable our forces to be fully in control of security”. Also, American diplomats, military officers, and USAID officials tell CNN that they see progress in Somalia, with many of them citing increased security in major cities and reform efforts as examples of success, which has been bolstered by recent reform efforts made by the government. A huge progress is under way, in the background SNA, Police and other law enforcement sector trainings are going on, so Somalia will survive after AMISOM exit.

6. If you want U.S. support, why lease your country to China?

No place in Somalia has Chinese presence at all. The united states and Somalia have a very good diplomatic relations, the prime minister visited the United states several times and pay no visit to china ever. Of-course no one can deny china’s influence in Africa, but China has very little footprint in Somalia. absolutely it wasn’t a good deal to give china a license to fish in Somalia sea regardless of the type (Quartez Africa – December 24, 2018).

7. Why ask the International Court of Justice to mediate Kenya dispute and then not wait for decision?

Both Somalia and Kenya, adjacent States on the coast of East Africa, are parties to the United Nations Convention on the Law of the Sea – UNCLOS, (Reuters – July 6, 2012). On February 2nd, 2017, The ICJ delivered its Judgment on the preliminary objections raised by Kenya in the case concerning Maritime Delimitation in the Indian Ocean (Somalia v. Kenya), in which it finds that it may proceed with the maritime delimitation between Somalia and Kenya in the Indian Ocean.

The ICJ Finds that it has jurisdiction to entertain the Application filed by the Federal Republic of Somalia on 28 August 2014 and that the Application is admissible. The people of Somalia are patiently waiting the final verdict of the case.

8. Why is Somalia bothering with the Israel-Palestine dispute?

Somalia abstained from voting on the last UN Human Rights Council on resolution condemning the Israeli occupation of the Golan Heights. Somalia has no powerful foreign policy or meddling capabilities as for the last decades Somalia has been dealing with their own internal issues.

9. Do you believe that Turkey is a stabilizing force for Somalia?

Erdoğan brought a sense of brotherhood and hope to Somalia after visiting a time in need (BBC News – August 19, 2011). Since 2011, Turkey has sent almost $1 billion in aid to Somalia. After the emergency was over, Turkish companies launched into major infrastructure projects, building roads, hospitals and the port. Turkish Airlines is the only international carrier that flies to Mogadishu. Turkey has cemented its place in the hearts of the Somali people. Turkish Airlines flight was the first passenger plane from Europe to land in Somalia (The Guardian – March 6, 2012).

Turkey Looks carrying capitalist agenda’s now, so History and time will only tell whether Turkey is stabilizing force for Somalia.

10. Why is reunification with Somaliland a goal?

Somalia took independence in 1960, since then Somalia was one country under one flag and constitution till 1991. Somaliland self-declared independence in 1991, but not recognized internationally yet. Currently Somalia has a federal government with representative from all over regional states including people from Somaliland. The federal government has an interim constitution, article 8 clearly defines the people and citizenship “The people of the federal republic of Somalia are one, are indivisible”. As Somalia and Somaliland talks are to resume soon, they will negotiate and hopefully will work on something.