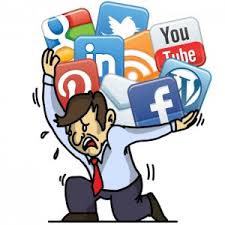 Social media is a phrase that has, recently, brought anxiety, isolation, loss of interest, idleness and low self-esteem into our modern world. Social media is used by people of all ages and genders. There are different types of social media, (Facebook, Twitter, Instagram, and Snap-chat), that people use for many different purposes such as; communicating with family and friends, getting updated on world information, as well as advertising products for business and commercial purposes.

Despite the many positive benefits and impacts of these social media sites, its excessive use is known to trigger an anxiety disorder called “Social Media Anxiety Disorder”. SMAD, in short, is chronic mental illness disease that affects the mind as well as the body. Unbeknown to the conditions and the proposed diagnostic results related to overuse of social media, users continue to disregard the harmfulness of social media, and rather believe that it’s only an instrument of entertainment, which is not always the case.

Users should ask themselves, the most important question that could help identify the existence of any form of health conditions. One repeated question to self-ask is, “Do you get anxious when you cannot check your Facebook or Twitter account?” According to Sarah Fader CEO and Founder of Stigma Fighters, “Social Media Obsession and Anxiety”, based on her research I had carefully watched the behaviors of my real friends online and how they use social media. What I had found out is that there are two types of social media anxiety disorders, an internal and an external stress.

The internal stress is when the users become obsessed with their accounts and want to know what is going on with their account daily, hourly and even minutes. It’s when users are continuously interested at who posted what, new things, articles, videos and/or pictures, who’s new and added into their group circle and following their account, who liked and/or had commented on their posts. All the questions above pose to deep rooted internal stresses.

Some people, by continuously comparing themselves to others on social media, experience low self-esteem. Emily Holland, a freelance writer and certified health coach, wrote an article called “Why we Compare ourselves to others on Social Media and How to Stop?” (tinybuddha.com, 2018), mentions people are constantly showcasing the best escape of their life onto social media.

In reality, very few of us would post on the not-so-good parts of our lives on social media, rather, we seem to not to think twice before posting our good moments of our lives. Once we internalize the fake images of our cyberlife we pretend to avoid the real current life we live in, thus turning our beautiful real world into dim fake one.

The external stresses are caused when one posts articles, pictures and videos or ideas, and in return negative comments and backlashes are received.  This causes stress, turning user thoughts to a more destructive one. Due to lack of confidence, many of today’s social media users tend to be competing on who has more likes and comments for the sake of their endless negative attention seeking behaviors. People who aren’t happy with their lives tend to turn to social media to fill that void missing in their lives.

On 14 October 2017, posting on “Black Day” and “Pray for Mogadishu”, I have seen some of the most graphic and harming videos on Facebook, undermining the effects certain pictures and videos could have on us, the users, for life, as the posts were all about the worst explosion that ever happened in Mogadishu, Somalia, caused by a truck bomb on an overcrowded area and on a busy intersection of which fuels and gasoline are sold. That tragedy caused many deaths and continues to be the highest number deaths ever in the history of Mogadishu, Somalia.

On that day, some people were posting on burnt dead bodies on social media. Some, among the burnt dead bodies recorded live on social media were kids. To my surprise, we could hear the scream-for-help of some of the victims while others continued to record and ignore to rescue and save lives. I was unable to hold my tears back when I saw a video of two boys about five to seven years old carrying a box that was full of dead burnt body parts, they claiming to it to be the body of their mother. I’m still unable to determine the level of harm, stress and anxiety that posting continues to have on my mind and body up until today.

A much more sophisticated and elevated version of Mogadishu’s terror attack was the New Zealand mosque terror attack. The shooting was recorded LIVE by the terrorist himself on Facebook, giving exposure to live mass murder to the entire world without any consideration to the young, old and to the vulnerable. There’s got to be rules and regulations for social media conglomerates and giant multi-national companies that own most of them, in order to eradicate the spread of hate and on social media, not to mention, the exposure of such live murder videos which is known to cause stress and anxiety disorders to millions of people throughout the world.

Now, think about the so-many negative uses of social media, and what we, as a society, tend to be gaining from it. We are fully aware of news stations and televisions cannot post and/or release videos and pictures that show horrific details and harm the wellbeing of another human being.  Due to the rules and regulations of the news corporations, harmful pictures and videos are omitted, and the viewers’ discretion warning signal is advised.

Social media users do not uphold to these rules, so long their posting receive more reviews, likes, comments, and shares. Researchers have indicated the correlation between active social media site users and the higher chances of addiction and anxiety. “Constant fear of missing events can cause anxiety and depression.” According to Joana Velozo and Johannes E.A Stauder, (2018), it is mentioned that “45% of adults in Britain feel worried or anxious when they are not able to access their social media,” and they also stated, “adolescence who spend more time on social media are more likely to skip school and have low grades.”

Students who spend several hours on social media end up not getting enough sleep and thus, interfering with their performance in school. Many students become very attached to their cell phones even when they are in class. No matter what they are doing or where they are at, their bodies are present, but their minds are absent, as they are not aware of what’s going on in class. We hear a lot about cocaine and heroin addictions, and the harm it causes to people, but barely do we hear any mention of those whom are affected negatively by social media sites, causing addictions and mental health concerns.

“Facebook use can become an addiction and has shown to activate the same “brain” areas as those addicted to drugs such as cocaine”. According to Ph.D. Davey C.L Graham, “Social Media, Loneliness and Anxiety in Young People”, addictions would make them idle to perform their daily routines, because they spend too much hours being on social media. Having said that, this addiction is not easily detected, thus causing many people not to immediately notice the negative effects of their social media behavior. Of course, it’s fair to say that social media has many positive sides, but we must also consider and take the necessary precautions of its negative side effects as well.

Hate speech, violence, and graphic media are being shared on these social media platforms freely https://world.einnews.com/news/ and they are not being stopped. Many of us are unaware of this problem because we might use social media in healthy way, or because we are oblivious to what’s going on.  It is our job as a society to step back and see what we can do to solve this issue. We must call out the CEO’s of these giant companies, involve government officials to bring about a change that regulates how negative social media harms our lives.