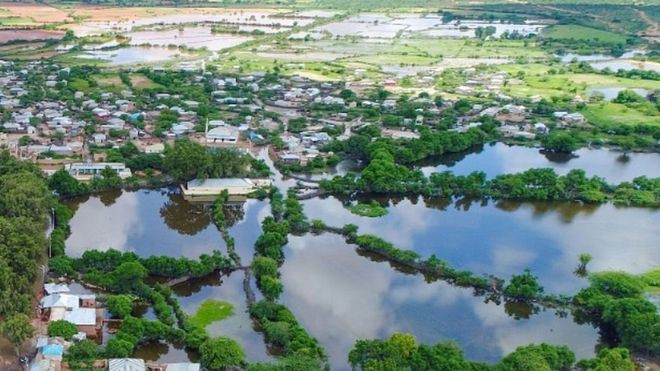 Beled Weyne, Somalia has been impacted by yet another major flood in the past few weeks. More than 200,000 residents have been impacted, some loss of life has been reported and the total devastation of this catastrophic event is yet to be determined. Beled Weyne city is the most populous city in Hirshabelle state with a population of 400,000 residents based on some estimates. These floods have inundated majority of the city by some estimates more than 80 percent of the city is under flood waters. Aid agencies, Somali citizens and the Federal government have all pledged support and mobilized to respond to this event.

How did we get here?

Flooding is a natural event and although one can plan and try to mitigate the impacts of a flood event, the risk from flooding can never be eliminated. Nevertheless, one must wonder why this cycle of draught and flooding continues to ravage Somalia. Beled Weyne has always been impacted by floods dating back to colonial era and recently in 1997, 2006, 2018 and 2019.

Beled Weyne is located along the Shabelle river and it is the most upstream city within the Somali national boundary. The seasonal weather variations for Beled Weyne and southern Somalia in general are influenced by the northward and southward movement of the Intertropical Convergence Zone (ITCZ). The ITCZ moves northwards in the first half of the year and southwards in the second half of the year. This movement of the ITCZ is the main cause of the seasonal weather patterns in southern Somalia. There are four seasons in Somalia; Jilaal, Gu, Xagga and Dayr. The main rainy season in Somalia is the Gu season, which is between April and June. The intertropical front enters southern Somalia around March moving northeasterly and the Gu season occurs behind the intertropical front between April and June. The second rainy season is Dayr and runs from October to November.  Although, continuous rainfall was recorded within the Shabelle basin section in Somalia, the bulk of the river flow originates from the highlands of Ethiopia.

More than normal Dayr rainfall in Hiraan region and the highlands of Ethiopian upstream resulted in an increase in water levels in the Shabelle river. Small ephemeral channels within the Somali portion of the catchment all contributed during this period and weather stations maintained by FAO reported increase in the river levels early October. As early as August, FAO indicated that models were showing a higher probability for a wetter Dayr. Warnings were issued by the various aid agencies as the river level continued to increase. Degraded river banks, non-engineered levee systems and developments adjacent to the river increased the risk the flood impacts.

This is nothing new

This is not the first time the residents of Beled Weyne had to flee the town due to flooding.  Dating back to the colonial era, residents reported flooding and had to relocate to higher ground. Some of the earliest recorded flooding occurred after independence in 1961 along the Shabelle and Juba rivers. Then there was 1981 Gu floods that impacted the Shabelle basin and resulted in wide spread displacement of the residents in Hiraan region. The most devastating flood to impact Beled Weyne was the El Nino event of 1997/1998 that led to widespread flooding and loss of life in Beled Weyne and other communities along the Shabelle and Juba rivers. The 1997/1998 El Nino was a unique event where the entire catchment for the Shabelle river received record rainfall and all ephemeral streams in Somalia contributed to the river flooding. By some estimates close to one million citizens where impacted by the flood which occurred post the civil war era with no functioning central government. Ever since the 1997 El Nino flood, the frequency and severity of the flooding seemed to increase. Major floods ravaged Beled Weyne in 2006 during the Dayr season (similar to this flood). The 2006 flood also displaced majority of the residents in Beled Weyne and inundated close to 80% of the city. The most recent floods occurred last year during the Gu season. The April 2018 floods impacted majority of the city and occurred just months after Hiraan was suffering from drought conditions.

So what is causing this reoccurring flooding phenomena?

Hard to say, but most likely a combination of factors including some of the following:

Somalia has been relying on aid agencies to provide funding and assistance on essentially every disaster related task. From the 1960’s, aid agencies played an imported role in developing the hydrometric network for Juba and Shabelle rivers. This included various studies including, land survey, soil survey, and establishing the monitoring stations. While we should be grateful to the international community for providing this assistance, one must wonder at what point will the locals and the government take ownership of this issue and try to gain a deeper understanding of why they keep reoccurring.  Most of the watershed for the Shabelle river (same as Juba) lies within Ethiopia, and Ethiopia maintains a network of gauges along the rivers. A list of gauges upstream of Beled Weyne is shown in the figure below.

Why hasn’t the Federal Government coordinated with the Ethiopian counter-parts to establish a transboundary monitoring system for the river?

The figure above (circa 1973) illustrates the profile of the river within Ethiopia. The dark black rectangles represent the hydrometric network maintain by Ethiopia upstream. The Ethiopian National Meteorology Agency maintains a robust amount of data, see the link below.

It is crucial for the Somali Federal government to coordinate with their Ethiopian counter parts to share data. For example, the Ethiopian government has weather gauging station in Kelafo to monitor the rainfall and the river levels. Kelafo is upstream of the Somali national border and the water levels in Kelafo and Mustahil would be vital for Beled Weyne.

Within Somalia, all the active hydrometric network and weather stations along with all the pertaining data are in the hands of aid agencies. The Somali government completed a detailed hydrometric inventory and field verification in 1991 by Sir M MacDonald & Partners Limited. FAO/SWALIM maintains 120 weather stations and 8 stream gauges along the rivers. It is crucial for the Somali government to develop this capability. If the problems are not understood from a macro or a system level, long term solutions will not be developed to solve these redundant issues. Currently, Somalia relies on aid agencies to identify the problems and to also come up with solutions.

To alleviate this issue, the Somali officials need to develop a strategic plan to look at the reoccurring disasters from inception instead of always responding spontaneously to each event. To accomplish this there are some short-term needs and long-term needs, some examples are shown below.

I get that Somalia has other priorities, mainly security now and unfortunate political gridlock, these short-term solutions could be done without a significant amount of cost. The aid money allocated for droughts and flooding response far outweigh both short term and long-term solutions listed combined. The key is to take ownership of these issues and stop relaying on others. Beled Weyne residents could do some of the items in the short term without relaying on anyone by developing their own disaster response plan locally or prohibit development in certain parts of the floodplain.

By Muhittin Ataman Western media outlets and politicians have been trying to discredit Qatar through biased and fabricated...
Read more