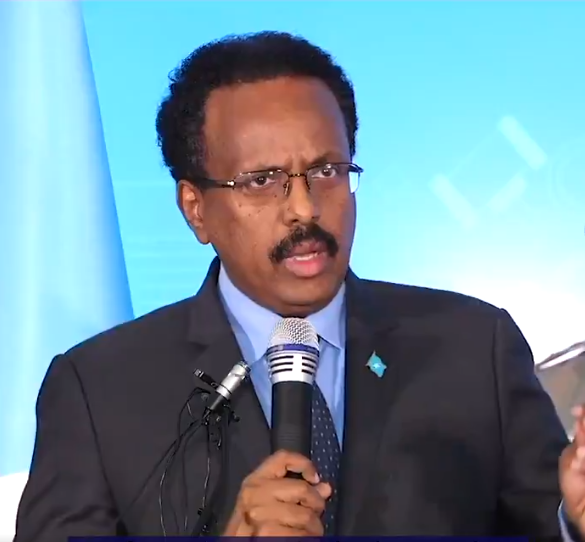 The author is a researcher and analyst of Somali politics.

The opening of the 7th session of the Somali Bicameral Parliament was a unique one. It coincided with a time when Somalia finds itself amid a political uncertainty largely emanating from the failure of the political elite to settle for an inclusive electoral model and poor relations between the centre and the periphery. The country also struggles with the COVID-19 pandemic that has the potential of pushing the election timelines among other potential threats.

This 7th session, which is also the second last one, has important and intricate national issues to address and deliberate upon. From the electoral law-cum-model, the constitution review process to the representation of Mogadishu in the Upper House. The parliament has a load of work to carry on its back and has to work in a limited time frame and an environment characterized by the politics of push and pull.

Highlights from the Speech of the President

The speech of President Mohamed Abdullahi “Farmajo” was the most awaited. For a leader who leads a troubled nation and whom critics accuse of poor public relations and lack of consultations with the political stakeholders, the speech served as a litmus test as to what the president intends and how he will lead the nation in this trying time.

The president listed some of the achievements of the government, sent condolences to a deceased MP, thanked the Government of Turkey, and praised the work of the parliament. He emphasised on the aspect of universal suffrage and that the Somali people will have the opportunity to directly cast votes for their favourite leaders for the first time in several decades. The president urged the Somali people to get ready for free and fair elections and vote for the parties of their choice.

The president has time and again underlined that this is his stand but by him maintaining that has caught many unawares. Many, including me, doubted his commitment to universal suffrage but he seems to be striking us with sheer surprise. The feasibility of the universal suffrage is, however, still doubtful and seemingly a daunting task to deliver- at least in the short remaining time and if there is no extension. It’s wonderful but also concerning the MPs didn’t mind asking about the viability of a one-person-one-vote; bringing in the question of whether they are also warming up for extensions or have no clue of what the president’s sentiments entailed.

The president has also requested the joint sitting of parliament to support him in ensuring Mogadishu gets representation in the Upper House. He explicitly termed his request as a “presidential one”. It’s an open fact that the representation of Mogadishu and the status of the Benadir region is marred by a lot of election politics, clan power play, and legal quagmires, and hence wouldn’t be a walk in the park given the short time and the sharp political division. If the representation of Mogadishu is determined and agreed upon, Farmajo will have an advantage and a legacy that he can use to appeal with the Mogadishu elite and the masses (in the case of a one-person one vote).

An analytical reading between the lines of the president’s words also suggests that the representation of Mogadishu shall be an inclusive one that meets the threshold of the national image (read 4.5 formula).

It is always tough to draw the line between what is misconduct in the chambers of the parliament and what is not. Even legal minds have difficulties in defining this matter and tend to disagree over the simplest misconducts. Speakers often differ in the judgments they make when confronted with such situations.

Somalia’s immediate neighbour, Kenya, has had its fair share of drama in their parliament. For instance, in 2016 when President Uhuru Kenyatta was giving a state of the nation address in the parliament, he was faced with whistles and booing from opposition MPs who were later ejected from the sitting amid other disciplinary measures. However, the Somali constitution doesn’t address in detail how such situations should be tackled.

If you subject the moral compass to how some of the MPs behaved in Saturday’s sitting (whistling, standing up without speaker’s permission), we can agree on the bottom line of this: that such conduct was not honourable and desirable for legislators. They should have listened to the speech of the president and use other channels to air their concerns and resentments. The speakers of both houses should put their chambers in order and prepare for such situations in the future.

However, we should also note the whole mess speaks to a deeper problem in the country’s political landscape and is something triggered by grievances certain regions and political groups have against the government of President Farmajo. I bet it was no surprise for him to witness such a turn of events.

The president, for more than two years now, has barely any relations with sections of the political class and some of the member states.

Highlights of the speeches of the Speakers of the two houses

The speaker of the Lower House, Mohamed Mursal, called upon the government to expedite the process of establishing the Justice Service Commission and submit the names of the commission as well as the Judges of the Constitutional Court. He also lauded the Commission tasked with the constitution review for the work they have done in undertaking member states level consultations in South West, Hirshabelle and Galmudug, and urged them to consult with the remaining member states.

Moreover, Abdi Hashi, the speaker of the Upper House, emphasised that for federal-level elections to be held it will be a prerequisite for the Federal Government, the Federal Parliament, Member States and other political stakeholders to come together to agree on an inclusive approach towards the elections. He also urged the Federal Government and the Member States to solve their disagreements through talks in the spirit of the national interest.

President Farmajo has alluded to a few issues that have stirred controversy and debates among the Somali people. For the public interest, such issues should be debunked and subjected to a fact check.

1. The president said that his government is the first government (after the civil war) that has provided free education to the Somali people.

Fact: That’s simply not true. The first free public education was launched during the tenure of President Hassan Sheikh. Maryan Qasim who the Minister of Health, Education & Social Services by then led this initiative dubbed “Go‐2‐School” – aada dugsiyada – in 2013. The program which was supported by UNICEF enabled an estimated 250,000 children and youth across the country to go to school at the end of 2014.

However, it is worth noting that the Ministry of Education is currently doing a marvellous job by providing free education to more than 16,000 students in Mogadishu, took over the management of 24 public schools and has almost 1000 teachers in its payroll.

2. President Farmajo said that there were 24 cases of insecurity in the first three months of 2020.

3. The president has also lauded the parliament for working with his government cordially and collaboratively and playing their oversight role.

Fact: Yes, cases of motions of no confidence that crippled previous governments were very minimal but since the controversial ouster of Speaker Mohamed Jawari, the blockade on the residence of Speaker Mursal, and “buying’ the loyalty of the House leadership, the parliament has been reduced into a rubber stamp for the government.

Some prudent national issues were missing from the speech of the president. In an important forum like the joint sitting of the parliament, it was a constitutional duty that the president addressed some of the issues and challenges the country faces.

– How in the proposed electoral law/model the OPOV which he sounds so passionate about will be compatible with the 4.5 clans power-sharing formula and -more confusing- the part system.

– COVID-19 and where the country stands at the moment with regards to the pandemic.

– The deep division and disagreement between the federal government and the member states, what he will do (if any) to overcome that.

This is a special time that calls for well-measured deliberations and decisions. The transition period and electioneering season puts the political stakeholders into task and they have no option but to look for a broad consensus on the sticking issues.

The leadership of the Parliament should lead the nation in rolling out an implementable electoral model. It should also, with the necessary speed, address the outstanding issues including the representation of Mogadishu, electoral model, and the ambiguities surrounding it.

President Farmajo should at this juncture get ready for engagements with the stakeholders and even extend an olive branch to those he perceives as his political nemesis. Even with the parliament supporting his call for an OPOV, he will still need to win over the confidence of the different stakeholders for the country to move on.

And more importantly, the self-defeating political posturing and rhetoric should stop for God’s sake. Time and history would not favour the political class if they continue with the same political theatrics and the scripts we have watched for the last 2 years. Cognizant of the short remaining time, the virtual meetings between the government and member states should restart as soon as possible to prepare good grounds for the leaders to engage and reach a consensus.

The article was originally published on The Frontier Website – Whistling, fact-checking and missing links: Key highlights from Farmajo’s speech.