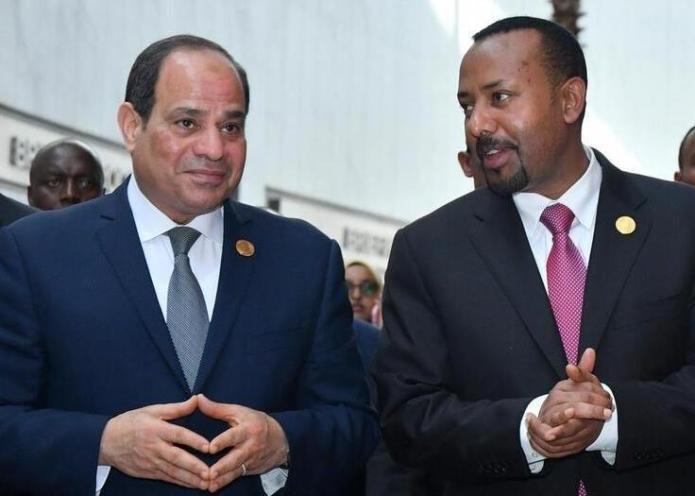 The Egyptian government has been stepping up its long-standing policy of destabilizing and weakening Ethiopia by “providing full support to anti-peace elements” and pitting neighbors against it, according to a top Ethiopian diplomat.

The official, who holds a high position in the Ethiopian Foreign Ministry and asked for anonymity, told Anadolu Agency that “Egypt has intensified its destabilization efforts against Ethiopia and the volatile Horn of Africa region.”

Last November, Ahmed told parliament that since he became premier, Ethiopia had witnessed 114 ethnic and religious conflicts, resulting in the deaths of thousands and displacements of millions of people.

According to him, all those conflicts were manufactured, instigated, and led by Ethiopian armed and unarmed forces bent on thwarting his administration’s political, social, and economic reform agenda in order to trigger a regime change or failed state.

The diplomat said that for more than half a century the Egyptian establishment has been providing financial, military, and diplomatic assistance to armed and unarmed Ethiopian forces in its bid to destabilize and weaken Ethiopia and thwart its ambition to utilize the resources of the Nile River.

Ethiopia has realized its Nile River utilization dreams by constructing the $5 billion Grand Renaissance Dam (GERD), which is now 78% complete, he added.

Ethiopia hopes the stalled negotiations between Egypt, Sudan, and Addis Ababa over the dam will eventually result in a win-win solution for everyone.

However, despite strong opposition from Egypt and Sudan, Ethiopia is planning to begin the second phase of filling this August. Early power generation is slated to start this January or February.

“It is in light of this development that Egypt has intensified its covert and overt anti-Ethiopian activities over the past couple of years,” he said.

The armed Gumuz militia has been unleashing brutal ethnic attacks on ethnic minorities in Ethiopia’s western Benishangul-Gumuz state, where the dam is located. Hundreds of civilians have been massacred and tens of thousands displaced.

According to the Ethiopian government, the sole aim of the Gumuz militia, which has been trying to block the main road leading to the dam, is to trigger a civil war in the region and beyond and eventually delay or thwart the dam’s construction.

“We have credible intelligence that Egypt has been assisting the Gumuz militia,” the diplomat said. “Egyptian security agents have been in touch with the leaders of the rebel group, and they are working on enhancing their support.”

Furthermore, the official said, the Egyptians are also trying to find an operational base for Gumuz as well as the militarily defeated and outlawed Tigray People’s Liberation Front (TPLF), which they had supported, and other groups.

“It’s worth saying that recently Egypt solicited the government of South Sudan to provide a military base for the groups,” he said. “But the South Sudanese authorities, who highly value our friendly relations, rebuffed the request in no uncertain terms.”

Sudan and Ethiopia have maintained peaceful relations for decades despite a long-standing border dispute over the agricultural area known as al-Fashaqa, which is adjacent to Ethiopia’s northwest Amhara region.

But last November, while the Ethiopian army was busy battling TPLF forces, the Sudanese army took control of the contested area.

Weeks after the move, Sudanese officials declared that the Sudanese army had managed to regain about 90% of the al-Fashaqa area and demanded that the Ethiopian army vacate the remaining two localities.

The Ethiopian government has sought a diplomatic solution to the dispute and accused the Sudanese army of entering deep into Ethiopian territory, killing and evicting farmers and looting their properties.

Last week, Ethiopian Foreign Ministry spokesman Dina Mufti accused Sudan of deploying its army further into the contested region and warned that Ethiopia’s “peaceful approach to the dispute has limits.”

Tensions remain high between the two countries, with thousands of heavily armed troops amassed along the disputed areas.

“The Egyptian government is pushing Sudan to engage in a conflict with Ethiopia, in its bid to weaken both countries,” the official said. “The situation will give Egypt more leverage to further infiltrate the Sudanese army and security apparatus.”

He added: “If the standoff turns into a full-blown conflict, Sudan and Ethiopia will endure collateral damage, while Egypt will benefit.”

The problem was caused and exacerbated by some military officials who fell into Egypt’s plot, he added.

Cairo has been actively seeking a presence in Somalia, a troubled Horn of Africa country which for decades has struggled to form a viable state and establish security.

“Throughout last year, Egypt tried to befriend the federal government of Somalia by promising military aid,” said the official. But, he added: “The Somali authorities recognized Egypt’s sinister motives and refused the military assistance.”

According to the diplomat, after the Somali federal government refused the offer, Egypt turned to Somaliland, a self-declared “country” that is part of Somalia and has been at loggerheads with the federal government. Last July, Cairo asked officials in Hargeisa, the Somaliland “capital,” to allow them to set up a military base.

“The Egyptians very well know the strained relations between Mogadishu and Hargeisa could turn into a military confrontation at any time,” the diplomat stressed. “They have been trying to add fuel to the Somalia fire.”

He continued: “The misguided self-centric Egyptian policy has been pushing the volatile Horn of Africa to further become a region of endless wars and destructions.”

According to the official, Egypt’s policy of trying to gain ground in the Horn of Africa is meant to get back the influence it has lost in the Middle East.

For decades, Egypt positioned itself as a peace broker in the Middle East conflict and managed to garner diplomatic, financial, and military support from the Western world. However, the rise of Gulf countries and other friends of the Arab world helped shrink Egyptian influence in the region.

“Egypt is trying to gain influence in our region. However, the region has demonstrated its will and capability to deal with its own problems and does not need Egypt to meddle in its affairs,” he concluded.

The article was originally published on Anadolu Agency Website.