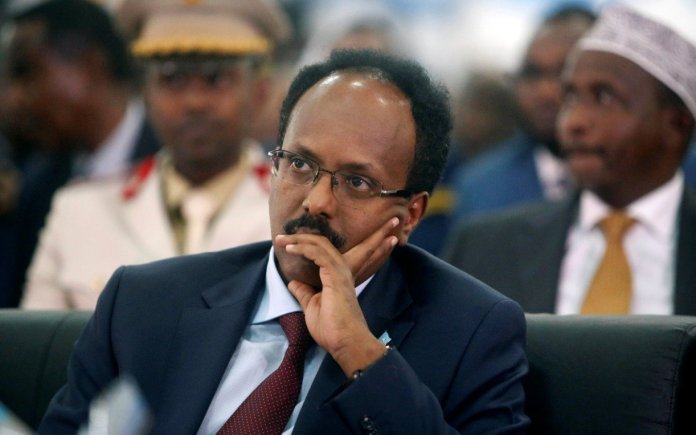 Guled Ahmed is a non-resident scholar at the Middle East Institute.

While the world was in shock over the storming of the U.S. Capitol by supporters of President Donald Trump seeking to overturn the American election results, Somali President Mohamed Abdullahi Farmaajo was engaged in his own silent coup to ensure a return to power after his term ends in February 2021. In fact, the similarities between the Somali president and his American counterpart are startling: Both came to power as outsiders that promised to change the status quo, both are Republicans from New York state, and both assumed power around the same time. Their governance styles, characterized by hubris, dysfunction, and highly confrontational methods, are almost identical as well.

More importantly, both leaders exist in the same orbit and have personal connections to controversial figures like Roger Stone and Michael Caputo. In a bid to get closer to the Trump administration, the Somali president has used both Stone and Caputo as lobbyists in Washington. Shortly after he assumed power, he was even given a MAGA hat by the U.S. ambassador to Somalia, which went viral on both social media and traditional media. Farmaajo’s autocratic bent and his obsession with upending Somalia’s federal framework and overturning the nascent democracy have faced considerable scrutiny, but his ongoing efforts to rig his way back to power have the potential to spark a civil war and undo almost two decades of incremental and painful struggle to reconstitute the Somali state, which collapsed after the defeat of the regime of dictator Mohamed Siad Barre by rebel groups in 1991.

On Jan. 9, Farmaajo and Prime Minister Mohamed Hussein Roble met with the presidents of the Federal Member States (FMS) that backed the Federal Government of Somalia (FGS) to pressure them to accept plans to hold unilateral elections. The leaders of the three FMS were originally put in place by the government to influence the upcoming federal elections. Due to Somalia’s complicated and opaque electoral system, FMS presidents wield substantial powers in ensuring their preferred candidates prevail. The leaders of the pro-FGS FMS, like the governor of the Banadir region that hosts the capital, Mogadishu, are former warlords with controversial backgrounds.

The prime minister announced that the FGS and their FMS allies would go ahead with a partial election for state and federal parliamentarians without the participation of Somalia’s other two states, Jubaland and Puntland, before Feb. 8. This would give Farmaajo a majority over the opposition alliance, resulting in an illegitimate election that would likely either trigger a violent backlash to topple his government like Siad Barre or lead to the creation of two parallel governments. The latter would be a repeat of the failed Bush-era dual-track policy later adopted by the Obama administration whereby the United States dealt with Somalia’s central government and sub-states simultaneously.

This comes on the heels of Farmaajo’s failure to agree on the implementation of the election process based on the Dhusamareb III agreement and an attempt to delay the elections following protests by Mogadishu residents since mid-December 2020.

This puts the opposition alliance and Farmaajo’s government at a stalemate that could lead to an electoral crisis with a disastrous outcome for Somalia—a country already sinking under the weight of mismanagement and al-Shabab’s terrorism. In the midst of this contentious election season, on Jan. 8, Farmaajo, Prime Minister Robleh, and Finance Minister Abdirahman Bieleh were accused by opposition leaders of attempting to auction off Somalia’s oil blocks without any agreed-upon laws governing natural resources and revenue sharing between the FMS and the FGS.

According to government insiders, the IMF sent a private message to Farmaajo’s government that if they auction off Somalia’s oil blocks to oil “flipper” companies that aren’t involved in actual exploration, then IMF debt relief is off the table. This would violate the consent agreement with the FMS on revenue sharing, which was a prerequisite to debt relief and part of the so-called Heavily Indebted Poor Countries Decision Point. Shady backdoor deals to auction off Somalia’s oil blocks would be akin to those seen during the last days of Siad Barre, who granted unprecedented concessions before he was overthrown in 1991.

While in power Siad Barre treated Somalia as a commodity, trading its natural resources for food aid and weapons to maintain his control. When he visited Washington in 1982 and met with President Ronald Reagan, the Somali dictator famously boasted that he told Reagan, “I bring you Somalia. Do with it what you will.” The Reagan and Bush administrations provided military aid and economic development packages to Somalia despite Siad Barre’s corruption and human rights violations.

In the 1980s, Siad Barre granted ARCO an oil exploration block concession exceeding 140,000 sq km, including the entire Mudug Basin and the Lamu Basin oil blocks adjacent to the border with Kenya — an area almost equivalent to that of New York state. The International Development Agency advised him to reconsider the concession, which was larger than those granted by other countries in Africa and would have major long-term consequences but only short-term gains. More than three decades on, Farmaajo seems to be repeating Siad Barre’s mistakes and is attempting to auction off Somalia’s oil and gas blocks in order to finance his reelection and prolong his rule. The international community needs to strongly and clearly oppose Farmaajo’s ongoing silent coup. The American ambassador to Somalia, Donald Yamamoto, who called the opposition “spoilers” when they raised concerns over potential election rigging, has yet to speak out against Farmaajo’s partial election announcement and efforts to secretly auction off Somalia’s oil blocks. The opposition has repeatedly warned that this has not only emboldened Farmaajo but also become one of the driving factors behind Somalia’s electoral crisis.

Oil and gas concessions are another key driver as well. According to research from the London School of Economics, they are now “an important factor in political dynamics in the country,” with outside actors including companies from Turkey, Qatar, Norway, and the UK interested in Somalia’s potential reserves and pushing to expedite auctions.

With the election fewer than four weeks away, nobody knows what Farmaajo’s next move will be—whether he will resign to ensure a smooth transition and allow a caretaker government to be formed before Feb. 8 or continue his attempted silent coup after the failure of the secret oil auction.

For now, Somalia’s potential oil reserves seem to be a curse, not a blessing. Somalia is a country that lacks basic government institutions and infrastructure, has extremely limited financial resources (domestic tax revenue comes to just 2 percent of GDP), and depends on external aid and protection against extremist elements like al-Shabab and ISIS. Allowing Somalia to sell oil blocks right now is like letting a child drive a Ferrari. Instead, Somalia’s donors should abandon the aid-for-oil model that only produces kleptocratic leaders like Farmaajo, and focus on investing in infrastructure for climate action, Somalia’s neglected blue economy, and agriculture. This will create a sustainable path to industrialization and start the road to prosperity and self-reliance.

The Biden administration should be wary of Farmaajo’s ambitions of upending Somalia’s nascent democracy and his admiration for regional despots like Eritrea’s Isaias Afwerki and the late Somali dictator Siad Barre, and should be especially cognizant of the emerging Horn of Africa axis. The new administration needs to regain the trust of the opposition alliance and take steps to hold Farmaajo accountable for his human rights violations, corruption, and inability to hold credible elections. A renewed focus on Somalia and new diplomatic representation in Mogadishu would be a good first step. Farmaajo’s broken promises have set Somalia back by decades and his obsession with holding onto power has already torn the country apart. In dealing with him now, the Biden administration must learn to avoid the mistakes that Bush and Reagan made and not allow another dictatorship to take shape in Somalia like that of Said Barre.

The article was originally published on The National Interest Website.