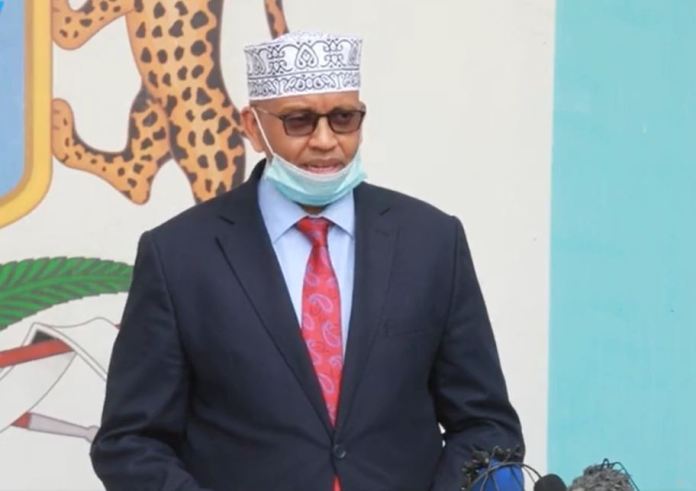 Somalia marked a grim milestone on Jan. 26, exactly 30 years since clan-based fronts, backed by foreign nations, ousted the last central government and then turned the once prospering, developing and peaceful country into a wasteland, where famines, massacres, poverty, terrorism and illiteracy reigned supreme.

The international community generously helped Somalis during their hour of need: They hosted fleeing Somalis, providing them with safety, food, shelter, medicine, education and, even, citizenship. Some of those refugees have later become world-known figures in their second homes – a minister in Canada, a congresswoman in the U.S. and a four-time Olympic champion in the UK.

We’re grateful for that assistance and, as a minister of this proud nation, I say to the world ‘thank you so much.’

Somalia is a nation of survivalists. We persevere in the face of calamities – yet don’t lose our signature smile on our faces. We’re a brave and proud nation. We’re patient, friendly and hardworking people – facts everyone who interacts with us appreciates. The U.N. envoy for Somalia James Swan was recently effusive in his praise of Somalis, talking of the “courage and resilience of Somali citizens who have persevered through some of the toughest conditions in any country on the planet over the past three decades.”

“Somalis are amazing, by the way, if you didn’t know this. You’re amazing people. You’re very entrepreneurial, you know, very creative,” Keating said in a speech in 2018.

I am glad that the international community does not only stand us in good stead, but also appreciates the good qualities in our people.

As we look to the future with hope, we must also take stock of the painful past. While some nations have selflessly helped Somalia’s recovery, others have hindered it all the way.

That is why the international community’s role in Somalia over the past 30 years is a mixed bag. I am saying this because when we talk truthfully about the past, we will be able to correct the mistakes and create a bright future for this promising nation.

It’s a fact that Somalia’s steady attempt to turn the page on destructive policies of the past have been frustrated by war-profiteers, anarchists and Somali politicians backed by few foreign countries who want to keep it in lawlessness because that either helps their masters or fulfills their selfish intentions.

The true colors of these groups emerge mostly during election times and their slogan appears to be “our way or Somalia will be kept in hell.” On Thursday night and Friday, security forces foiled a plan to stage an armed insurrection in the capital under the guise of peaceful protests.

While the Somali government celebrates the demise of the TPLF-dominated administration in Ethiopia, it’s unfortunate that the Somali nation is still wrestling with Kenyan-backed politicians, whose sole aim is to turn the clock back to the old days when war-lords called the shots in the country and foreigners looted our natural resources.

I have no doubt that Nairobi and others, like the United Arab Emirates, that wish us failure, will themselves fail, God willing, because they’re the aggressors. I believe wholeheartedly that the DESTINY of Somalis will always remain in their hands – not in the hands of foreign cities or organizations.

As the nation enters an election year, I want to assure all Somalis and friendly and helpful nations that President Farmajo’s administration is genuinely committed to holding peaceful, inclusive, free and fair elections, whose result could lead us to a prosperous Somalia.

Since last year, the government has climbed down from many positions – our initial plan was to hold one man, one vote election – to compromise for the nation and even please opposition groups, which curiously include regional leaders who usurped the role of the Senate.

President Farmajo and Prime Minister Mohamed Hussein Roble have held many private and public meetings with top opposition figures and regional leaders to resolve any election-related differences. Prime Minister Roble has hit the ground running immediately after his swearing in on Sept. 23, paying several visits to Garowe, Dhusamareeb (now Samareeb) and Baidoa to confer with regional leaders. The Prime Minister’s office is wide open for all Somalis who would like to share with him their concerns or counsel.

On Sept. 17, President Farmajo and regional leaders agreed on an electoral model and time that were to guide the country’s 2020-2021 elections. Unfortunately, as the Somali public and the world know, our electoral train that was set to leave the station on Nov. 1 has not yet started because of the constant roadblocks erected on the road to a peaceful and timely process.

In the southern region of Jubaland, for instance, a Kenya-backed and –armed militia attacked the border town of Belet Hawo on Jan. 25, sparking off a confrontation that killed 14 civilians, including women and five children from the same family. The conflict was a part of a wider attempt by Kenya and others to sabotage Somalia’s elections for fear of the incumbent’s reelection. Some nations harbor an evil belief that if President Farmaajo is reelected, they will no longer be able to continue their destructive policies in Somalia, hence their vicious fight against Somalia and against the President personally.

We’ve recently cut ties with Nairobi for its constant interferences in our internal affairs. On Sunday, the Somali government denounced the United Arab Emirates’ sabotage against Somalia and its desire to create chaos and displacement in the country, as it did in Yemen and Libya.

The international community and organizations, especially the U.S., the U.N., the African Union and the E.U., would be very helpful if they work with the national government and channel their advice and criticism through the open and proper channels of the Ministry of Foreign Affairs.

Symbolism matters in Somalia. International community’s respect for Somali institutions will go a long way in restoring the trust of the Somali public in their government. One of the main arguments of the terrorist group of al Shabab is that Somalia is being colonized by foreign nations that dictate orders to the Somali government.

It’s said to note that the international community is unwittingly playing into the terrorists’s narrative. Between Jan. 28, 2020 and Feb. 8, 2021, our international partners have issued more than a dozen public statements on Somalia’s elections. While we welcome our partners’ interest in our elections, it is regrettable to see our partners reduce their noble role of helping Somalia into public statements, which seem to many Somalis as just mere stunts aimed at attracting attentions.

Our international friends could have been more supportive if they had channeled their energies toward the fundamental issues that are holding back Somalia’s march toward stability and functioning institutions. The world shouldn’t ignore the behavior of a couple of regional leaders who act like they lead an independent nation. There must be consequences for seditious acts and collusion with foreign nations, crimes openly committed by some Somali regional leaders and politicians.

A secure Somalia at peace with itself is good for the world. Therefore, the world must punish, impose sanctions and ostracize peace spoilers to deliver Somalia from further chaos.

The Somali government welcomes constructive criticisms. It has never claimed to be perfect. It needs its international partners’ support and advice. But Somalis want their international friends – collectively and individually – to first share their concerns, counsel and criticisms with their government through diplomatic channels, not through Twitter, Facebook and other social media outlets. That shouldn’t be too must to ask.  Somalis want their international friends to strengthen their nation’s institutions and not unwittingly lend support to evil forces that thrive — as they did in the last three decades — in chaos and lawlessness.

Buttressing the gains the Somali government has so far made is not only a safe bet, but it’s an ethical and logical way to protect this fragile nation – where saboteurs, local and foreign, galore – from relapse.

The article was originally published on The Somalia Star Website.