The Kurdish Dream of A State – Analysis 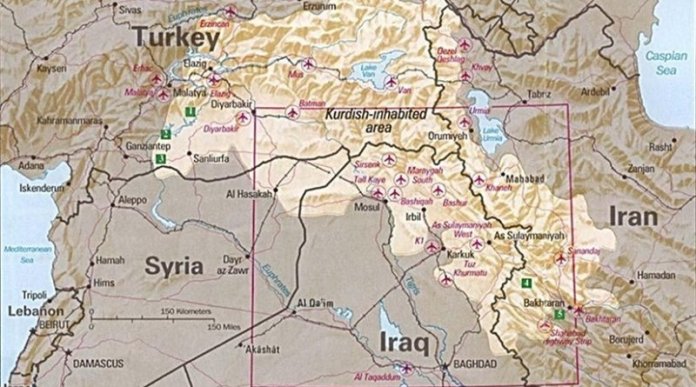 The author is a Research Coordinator at Global Counter Terrorism Council

The Kurds are often considered to be the largest ethnic group without a territorial boundary of a State. Today, the Kurdish population is dispersed unevenly across countries like Iran, Iraq, Turkey, and Syria mainly. A part of the Kurdish population is also spread across Trans Caucasus and Central Asia. There remains a debate amongst scholars about the ethnic roots of the Kurds. It was during the 7th century that the name ‘Kurds’ was attributed to Western Iranian people, residing along the mountain chain of Zagros and in the eastern boundary of Taurus. The Kurdish as an ethnic group had a considerable influence in the history of middle-west until the Arab Caliphate ceased to exist in 1258.

To understand the Kurdish freedom struggle, it is imperative to have a more or less clear understanding of the Kurdish history. The Kurds have always been a significant ethnic group, even during the period of Ottoman rule. With the dissolution of the large Ottoman Empire after the First World War by the Treaty of Sevres, the large ethnic Kurdish population got divided haphazardly between the territories of Iraq, Syria and Turkey, making them a large minority group in each of the States. The Arab states have always seen the idea of an independent Kurdistan as a potential threat to their existence and hence, no stones have been left unturned to suppress the Kurdish nationalist struggle. It would be methodical to look at the history of the Kurdish freedom struggle based on respective countries involved in the Kurdish conflict.

The Treaty of Sevres was one of the series of treaties that brought an end to the 1st World War. It was rejected by the Turkish leader Kamal Ataturk, and the new Treaty of Lausanne was negotiated in 1923. This new treaty gave control of the entire Anatolian Peninsula as well as of the Kurdish homeland in Turkey to the nascent Turkish Republic. Unlike the Treaty of Sevres which provided for a referendum to be conducted to negotiate the issue of an independent Kurdish homeland, the new Treaty of Lausanne did not lay down a single word for Kurdish autonomy or the probability of a referendum to decide the Kurdish fate in this new Turkish state.

After Ataturk consolidated his political grip over Turkey, the actual face of the regime was getting more and more evident. By 1978, Kurdish language, Kurdish names, folklores, attires and all other forms of cultural representation was banned. In an effort to deny the very Kurdish existence in the country, they were started being referred to as the “Mountain Turks”. Following the military coup of 1980, the use of Kurdish language in either public or private life was banned, so were the use of the words “Kurds”, “Kurdistan” or Kurdish. Such forceful repression and growing discontent among the Kurdish population prompted the formation of PKK – Partiya Karkeren Kurdistan (Kurdistan Worker’s Party), a far left militant and political organization under the leadership of Abdullah Ocalan.

A full scale military insurgency was yet to begin until 15th August, 1984 when the PKK officially declared a Kurdish uprising. From 1984 till 1st September 1999, when the PKK declared a unilateral ceasefire, Turkey saw unprecedented instances of human rights violations. About 40,000 civilians died in these 15 years. After 5 years of maintaining ceasefire, it was finally lifted by the PKK on 1st June, 2004. The military uprising of this decade was much more brutal and vicious than what it had been like earlier. The number of Human Rights abuses increased at an exponential rate. Torture, systematic execution of Kurdish civilians, forced displacement; arbitrary arrest became the norm of the day. Since the summer of 2011, the uprising took a more violent turn with large scale hostilities. In 2013, the process of negotiation was started between the PKK and the Turkish Government. Another ceasefire was declared bilaterally when Ocalan announced the “end of armed struggle” which was only to be resumed again in 2015 following the widespread massacre of PKK activists in Iraq at the hands of the Turkish military.

According to the statistics given by human rights organizations, more than 4000 Kurdish villages have been destroyed since the beginning of the uprising, with 380,000 and 1,000,000 Kurdish villagers being forcefully evacuated. Some 35,000 Kurds have been killed, 17,000 have disappeared while 119,000 Kurds have been imprisoned by the Turkish authorities arbitrarily. The condition at present is still the very same with rampant human rights violations, arbitrary arrest and detentions. Negotiations between the Turkish government and the PKK have become impossible in such a situation of mutual hostility and violence.

After the dissolution of the Ottoman Empire, a significant number of Kurds became a minority in Iraq. The first phase of Iraqi-Kurdish conflict began with the arrival of the British. Through some secessionist attempts, Mahmud Barzanji became successful in uniting the Kurdish tribes to form a short-lived autonomous, self-proclaimed Kurdish kingdom in Iraq between 1919 and 1922. Though his plan of a Kurdish kingdom eventually failed, the struggle for freedom was carried out by other Kurdish leaders like Ahmed Barzani (1931), Mustafa Barzani (1943-1945) in the first phase of freedom struggle.

In 1943 after Mustafa Barzani was exiled to Iran, the Kurdish revolt suffered a setback. At this point, Iraq witnessed the 14th July Revolution ousting the Hashemite monarchy from power and bringing General Abdul Karim Qasim to power. In 1958, after returning from his exile, Barzani made an attempt to negotiate Kurdish autonomy in the north of Iraq with General Qasim’s government, which ultimately failed, culminating in the first Iraqi- Kurdish Civil War (11 Sept, 1961 to 1970) with casualties more than a million. Despite repeated attempts at negotiations for Kurdish autonomy in Iraq, a second Iraqi- Kurdish Civil War became inevitable in 1974 which resulted in a total massacre of the Kurdish militias and a recapturing of northern Iraq by the Iraqi troops. This led to a political vacuum in the area with the PUK (Patriotic Union of Kurdistan) gaining power and leading an insurgency campaign against the Iraqi Government. The PUK suffered a major defeat from KDP in 1978 with support from Iran.

The Iraqi- Kurdish conflict resurfaced as a part of the Iran- Iraq War when the Kurdish parties plotted against Saddam Hussein with help from Iran. By then the Iraqi government had had enough of “non-loyal” Kurdish presence in the North and started its genocidal campaign called ‘Al- Anfal’ for the ethnic cleansing of the Kurds, in which over 200,000 Kurds were killed. In spite of the mutual recognition after 2003 Iraq War and the fall of Saddam Hussein’s regime, conditions have not improved, with repeated clashes erupting between the Iraqi Kurdistan and Iraqi central government over a multitude of issues, but mainly power sharing and oil reserves. The 2017 Iraqi- Kurdistan referendum also ended with a diplomatic crisis.

Ethnically and linguistically, the Kurds form a major ethnic group in Syria. But despite such a numerical strength, the Syrian Kurds have not gained any autonomy unlike their Iraqi counterparts. Roughly 15 percent of the total Kurdish population in Syria remains stateless, in a legal vacuum without any fundamental rights. Despite Kurdish being the second most widely spoken language in Syria, it has never been officially recognized. In 1962, on the pretext of illegal immigration from Turkey and Iraq, 20 percent of Syria’s Kurdish population were stripped of citizenship.

After the 1970 military coup which brought Hafez al- Assad to power, instances of arbitrary behavior of the Syrian Government towards the Kurdish population increased by leaps and bounds. The same legacy was carried forward by his son, Bashar al- Assad. After the Arab Spring of 2011 which culminated into a deadly civil war in Syria, things got very complex in the Syrian political arena. The civil war gave birth to radical Islamic extremist militia, the ISIS (Islamic state of Iraq and Syria), which made the very existence of Kurds in Syria as well as in Iraq a big question mark.

As of now, the struggle of the Kurds is not against an arbitrary dictatorial government but against these forces of radical militia which threaten the very existence of the ethnic group. The Kurds have consolidated themselves under the pseudo military border guard called Peshmerga, to take up arms against this extremist militia. The Kurdish lands that were won back from the ISIS now form a de facto autonomous region called Rojava, under Kurdish administration, covering the sub regions of Afrin, Jazira, Euphrates, Raqqa, Tabqa, Manbij and Deir Ez- Zor.

With a sudden surge of right wing nationalism and majoritarianism in world politics, the chances of diminution of this long battle for recognition have taken a further step back. None of these three countries are ready to sit on the negotiation table. To worsen matters, Turkey has initiated a military offensive, codenamed Operation Peace Spring in north eastern Syria, apparently as a way of driving out the SDF (Syrian Democratic Forces), an ally of the PKK. But the implementation of this operation clearly suggests that it is just another tool to eliminate about 3.6 million of Kurds refugees from Turkey, in this particular area, who were proposed to be resettled here. The political atmosphere still being volatile in Iraq and Syria, no question of catering to the demands of the minority Kurds or even giving them the bare minimum social and political rights is arising; as of now. Things have taken a turn for the worst. The Kurds, as a community still needs to fight the battle for their existence. The struggle for their survival continues and it is a zillion miles away from being over.