Kenya Frames Somalia as Intruder in the Maritime Dispute 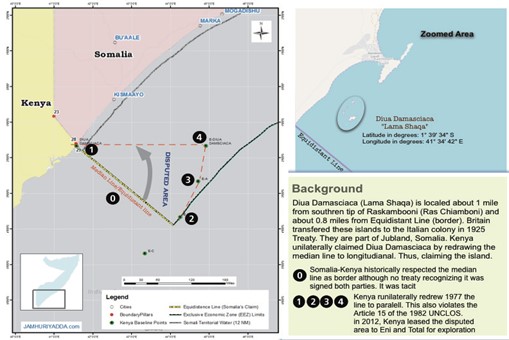 A maritime dispute case concerning Somalia-Kenya maritime border delimitation is brewing at the International court of Justice (ICJ). To understand the dispute, imagine your home flooding, and you forced to flee for safety.

After spending some time away from home, you finally return to home and discover that your neighbor rented a portion of your backyard. You try to raise the issue with the neighbor, but denies allegations insisting that portion of land has always been his property. To prove it, the neighbor produces tampered documentation to support the claim.

What’s more, the neighbor blames you the “real owner” trying to encroach his land. Angered by this shady character, you seek justice from the court. After the neighbor discovers that you intend to pursue legal venues, the neighbor shows up at your door eager to negotiate to avoid the court at any cost.

When you insist the only plausible solution is court adjudications, the neighbor turns belligerent and brings issues against you. As much as this sounds ludicrous, this is the predicament that Somalia is currently facing over maritime dispute case with Kenya.

In 1977, Kenya unilaterally claimed portion of Somalia’s maritime territory and framed the later as the intruder encroaching its territorial sea. The framing has not been a challenging task either for Kenya, since Somalia has for generations been known as that troubling neighbor.

Consequently, for the world Somalia must have done something wrong again this time too. This assumption is reinforced as Kenya controls most powerful media in the region to shape public opinion. But not that fast!

The source of the dispute: Ownership of Diua Damasciaca islands and The Equidistant Line

The source of the dispute lies on the ownership of Diua Damasciaca Island, and where the maritime borderline should draw. Diua Damasciaca Island is a Somali island. On 15 July 1924 Britain and Italy colonial powers signed a Treaty concerning boundaries of their respective territories in East Africa.

The result was the transfer of Jubaland from Britain Protectorate to Italian colony in Somalia. The transfer also included Diua Damasciaca Island, as the Article 1 of the treaty shows. In addition, the treaty fixed Somalia’s Land Boundary Terminus (LBT) with Kenya – the point where the land boundary reaches the sea – was set on Boundary Pillar 29 (latitude: 1°36’05.03” S; longitude: 41°33’52” E).

Kenya unilaterally claimed Diua Damasciaca islands as own territorial sea in 1977. Somalia has always maintained maritime borderline should draw according to the international maritime law (the Art 15 of the United Nations Convention of the Law of the Sea (UNCLOS) 1982 – “The Equidistant line”).

Kenya refuses to accept the Art 15 by issuing 1977 law and changed her view several times the latest being the 2005 Presidential proclamation to redraw maritime the border line as longitudinal (parallel) instead of perpendicular (the equidistant line). Sadly, that is what Kenya presumptuously argues in court.

Kenyan media dedicated substantial number of resources to produce misinformation with aim of framing Somalia as the intruder “encroacher”. Nowadays, it is a challenge to find a single article produced by Kenyan media that does not lead to the same conclusion – Somalia “the aggressor”.

Concocted half-truths, deliberately omitted facts and often blatant lies are all slickly packaged in order to build fictitious narrative to indoctrinate and appeal the political class and populace in support of propaganda.

The propaganda follows along the lines of “Remember Somalia when your home fall apart. I fed, shelter and cloth you, but now want to claim part of our maritime territory? Not even an inch“. This simplistic message is effective and dwells in the minds of the ill-informed populace.

Kenya thought by hosting large number of Somali refugees and contributing the establishment of the Somalia’s Transitional Federal Government would automatically entail her a handsome reward – a portion of Somalia’s maritime territory.

In 2009, Somalia-Kenya signed Memorandum of Understanding (MoU) not to object each other the submission of the claims of Outer Limit of the Continental Shelf to the United Nations regardless the existing of the border issues. Sadly, Kenya mischaracterized the MoU and used as legal basis of ownership of the disputed area.

Thus, Kenya signed leasing deal with ENI S.p.A and Total S.A in June 2012. The blocks L21, L23 and L24 were leased to Eni S.P.A while Total S.A secured L22. This happened despite Somali government objections and repeatedly warning Kenya that the MoU did not mean an agreement of the border boundaries of the two countries.

Later on  the UN’s Commission Outer Limit of Continental Shelf (CLCS) required Somalia-Kenya to agree on border dispute before reviewing the submission. The first two bilateral meetings were held in Nairobi. Kenya deserted the last bilateral meeting set on Mogadishu on 25-26 August 2014 without providing neither justifications nor apology.

Somali government angered by the Kenyan deceitful actions filed a lawsuit against Kenya at the International court of Justice (ICJ) on 28 August 2014. Surprisingly, Kenya’s propaganda machine quibbles Somalia not willing to negotiate even though they were the ones deserting bilateral negotiations disrespectfully.

Court’s Adjudications Ahead and Restless Kenya

The International court of Justice (ICJ) started the hearing on March 15, 2021. Kenya boycotted the oral proceedings because of its request for another delay, which the court rejected. As the hearing approached closer, Kenyan government and media are increasingly more agitated and restless. The paradoxes of this case is that the disputed area belongs to Somalia. And Somalia, despite almost 30 years of devastating civil war and its territory being claimed, remains calm and collected as it waits the final word from the ICJ.

We are, indeed, living in strange times where the victim of aggression appears the transgressor while the assailant turns the victim due to propaganda. Kenya can afford losing this case, since the area in dispute is not her territory. But jeopardizing its relationship with a valuable neighbor irreparably is certainly politically short sighted.