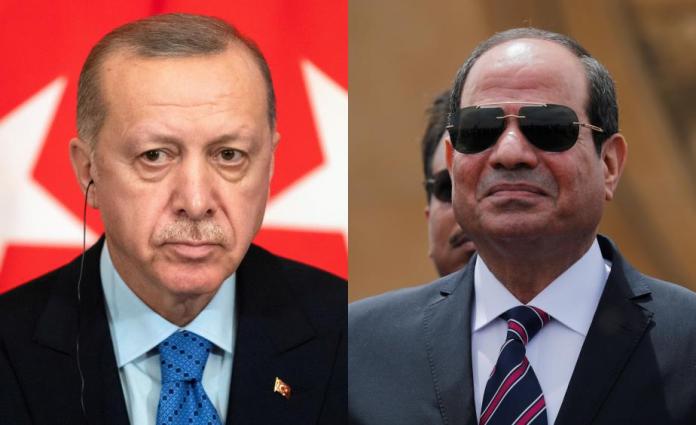 The author is a research assistant professor at Ibn Khaldun Center for Humanities and Social Sciences.

Last month, Egypt announced a new oil-and-gas exploration bid round in the Eastern Mediterranean. It notably took into consideration the coordinates of the continental shelf as declared by Ankara, according to the 2019 agreement between Turkey and Libya, registered by the UN last October. Ankara thus understood the Egyptian move as a positive message.

And this was not the first message of its kind. Despite criticising the Turkey-Libya maritime agreement, Egypt’s foreign ministry raised eyebrows during the Rome conference in December 2019 by asserting that it “doesn’t harm Egypt’s interests” in the Eastern Mediterranean.

When Egypt signed a maritime delimitation agreement with Greece in August 2020, experts noted that the agreement took into consideration Turkey’s reservations on the maritime borders of the islands. According to Turkey’s foreign minister, the agreement supported the Turkish thesis that the islands do not have sovereign continental shelves.

Cairo has recently introduced changes to its Libya policy that have brought it closer to Ankara. In the face of new facts on the ground in the North African country after Ankara successfully turned the tide against renegade Libyan General Khalifa Haftar, Egypt took a number of steps, sending a high-ranking diplomatic and security delegation to Tripoli and announcing plans to reopen its embassy for the first time since 2014.

Three days later, Turkish Defence Minister Hulusi Akar got involved in the Egypt diplomacy when he stressed during the Blue Homeland 2021 tactical exercise that the two countries share historical and cultural values, hinting at the potential for new developments.

Presidential spokesperson Ibrahim Kalin endorsed these statements when he told Bloomberg that “a new chapter can be opened … in our relationship with Egypt”. The fact that these messages are coming from the highest officials in the Turkish establishment reflects their seriousness.

The carefully crafted messages between the two countries respond not only to their common interests, but also to changing international and regional dynamics. US President Joe Biden’s victory in last year’s election pushed many regional countries, including Egypt and Turkey, to recalibrate their policies to accommodate the new administration.

On the regional level, Egypt was unhappy with the outcome of the recent Gulf Cooperation Council (GCC) summit, as its supposed allies, Saudi Arabia and the UAE, neither coordinated with Cairo nor took its interests into consideration when they agreed to reconcile with Doha.

The GCC reconciliation allows Turkey to strengthen its relations with Qatar, Kuwait and Oman while reaching a detente with Saudi Arabia and, to some extent, the UAE. In January, Egyptian officials had to listen to UAE officials express a desire to normalise relations with Turkey and to build on their mutual economic interests, while Egypt was on the brink of a collision with Turkey in Libya as a result of Emirati pressure.

Parallel to this, Greece and Turkey had their first official direct talks in five years on the standoff in the Eastern Mediterranean, while the UN prepared to convene a meeting to test whether a solution was possible to the Cyprus problem.

Cairo must have calculated that it would not be in its interests to remain anti-Turkey while its partners in the Gulf and the Eastern Mediterranean – mainly the UAE, Saudi Arabia, Greece, Israel and even France – were de-escalating with Ankara. This might explain why the diplomacy between Egypt and Turkey seems to have intensified lately.

For its part, Israel has been cautious about criticising Turkey’s stance in the Eastern Mediterranean. Tel Aviv is banking on the EastMed pipeline project to export gas to Europe. But given that the pipeline may never see the light of the day due to its extreme length (1,900 kilometres), cost (around $7bn) and route through Turkey’s claimed territory – which means that Ankara could block it – Israel will likely keep its options open with Turkey, as it would be the only alternative route.

Egypt has a similar issue with Turkey on the delimitation of maritime borders. Officials in Egypt’s foreign ministry and intelligence services have favoured a maritime deal with Turkey rather than Greece, as it grants Egypt a much bigger maritime area. But the Egyptian presidency agreed on a deal with Athens to secure some political gains, while not closing the door on Turkey – especially after the Emirati-Israeli accords, which harmed Egypt’s political, economic and strategic interests.

Aware of these facts and of Cairo’s geopolitical calculations, Ankara has been silently courting Egypt based on their common interests in the Eastern Mediterranean and Libya. Ankara’s carefully crafted messages are based on a win-win formula and the fact that cooperation with Turkey is in Cairo’s interests.

Indeed, in the pre-coronavirus period, Ankara offered many carrots to Cairo, increasing the volume of bilateral trade, investments and gas imports. Their economic relations have appeared immune to political fluctuations, rising over the last few years and crossing the $5bn threshold for the first time in 2018. Stability in Libya could boost this cooperation to unprecedented levels if Turkey and Egypt were to work together to rebuild Libya.

Politically, Turkey has a vital interest in keeping Egypt from being held hostage to other states that want to use it as a shield in their own battles with Turkey – mainly the UAE and Greece. In this sense, Ankara lends itself a hand by opening up to Egypt, and the same can be said about Cairo vis-a-vis Turkey.

Still, the exchange of positive messages between Egypt and Turkey doesn’t mean their possible rapprochement won’t face challenges. It simply means that they are trying not to let disagreements on certain topics prevent them from working together on common interests.

Obviously, there will be spoilers who would prefer to see Turkey and Egypt clash rather than cooperate, in order to preserve their own influence. There is also the question of whether Egypt’s messages are genuine or not, given that unlike Ankara, its preference previously has been to work behind the scenes.

Either it wants to score tactical gains by using Ankara to regain its own value in the eyes of its partners (the UAE, Greece and Israel), or it aims to establish a delicate balance, keeping its options open with Turkey in order to secure maximum gains from all players.

This could explain why Cairo sometimes sends mixed or conflicting messages, as it wants to open up to Turkey without losing the support of the others. Either way, communicating with Turkey serves Egypt’s agenda.