Why Somalia Sleepwalked into Maritime Dispute with Kenya 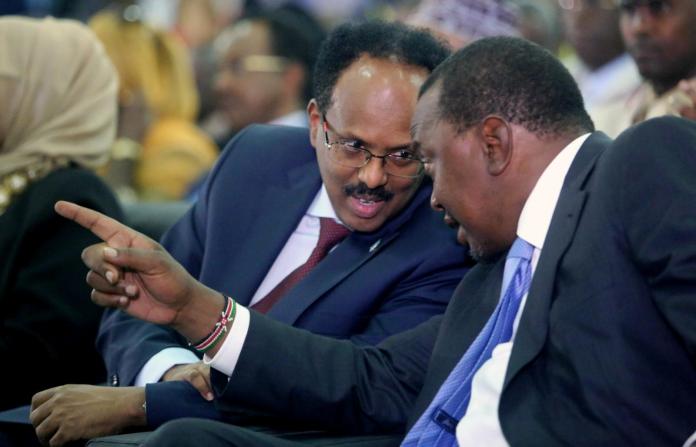 Mogadishu (PP Features) — The maritime dispute between Kenya and Somalia surfaced in 2009, the year the former Transitional Federal Government of Somalia signed a Memorandum of Understanding with Kenya “to Grant to Each Other No-Objection in Respect of Submissions on the Outer Limits of the Continental Shelf beyond 200 Nautical Miles to the Commission on the Limits of the Continental Shelf.”

The second paragraph of the Memorandum of Understanding gives Kenya the right to claim a maritime territory of Somalia’s:

In essence, the Transitional Federal Government of Somalia (TFG) accepted the argument that Kenya has a right to claim a portion of the Somali maritime territory, and that the dispute can be settled by both countries. No country has ever signed a MOU to put its territorial integrity into dispute. Abdirahman Abdishakur Warsame, the former TFG Minister for National Planning and the International Cooperation signed the MOA on Somalia’s behalf.

Between 2005 and 2007 Kenya approached the Transitional Federal Government of Somalia led by President Abdullahi Yusuf Ahmed about “Memorandum of Understanding” on a non-existent sea boundary dispute. An informal meeting was held in Nairobi between a Kenyan diplomat and Somali diplomat. Kenya proposed an MOU with Somalia. The Somali diplomat shared Kenya’s initiative with the former Somalia Foreign Minister Ismail Hurreh Bubaa. Mr Buubaa told the Somali diplomat that there was no maritime dispute between Somalia and Kenya and that the sea boundary between Kenya and Somalia was delimited.

It is hardly a self-serving statement in an election time. Sharif Sheikh Ahmed and Abdirahman Abdishakur Warsame along with Prime Minister Omar Abdirashid Ali Sharmarke resolved to grant Kenya the right to claim a Somali maritime territory. No one was held accountable for damaging Somalia’s national interest.

“The Somali territorial Sea includes the portion of the sea to the extent of 200 nautical miles within the continental and insular coasts, delimited according to the provisions of articles 2, and 3 of this Law.”

“The Exclusive Economic Zone of the Republic of Somalia extends to a distance of two hundred (200) nautical miles from the baselines from which the breadth of the territorial waters are measured.”

Before 1991 the Somali Government representatives attended conferences on the law of sea. In 1984 Dr Mohamud Ali Turyare, a former Professor of International Law at the Somali National University represented Somalia at one such conference on United Nations Convention on the Law of Sea.

How Kenya Exploits the MOU with Somalia

On January 24th 2017 Kenya expressed reservations about some articles of the Convention on the law of the sea:

“The Government of the Republic of Kenya pursuant to Article 298 (1)(a)(i) of the United Nations Convention on the Law of the Sea, 1982, declares that it does not accept any of the procedures provided for in Part XV Section 2 of the Convention with respect to disputes concerning the interpretation or application of Articles 15, 74 and 83 relating to sea boundary delimitations, or those involving historic bays or titles.  The Republic of Kenya reserves the right at any time by a notification addressed to the Secretary General of the United Nations to add to, amend, or withdraw any of the foregoing reservations. Such notification shall be effective on the date of their receipt by the Secretary General.”

Kenya has reservations about section 2 of article 286 which states:

“Subject to section 3, any dispute concerning the interpretation or application of this Convention shall, where no settlement has been reached by recourse to section 1, be submitted at the request of any party to the dispute to the court or tribunal having jurisdiction under this section.”

In 2014, the Federal Government of Somalia submitted the maritime dispute to the International Court of Justice, a decision backed up by the very article about which Kenya has expressed reservations.  Both Somalia and Kenya signed the United Nations Convention on the Law of the Sea on December 10th 1982. Kenya prefers out of court settlement to adjudication by the International Court of Justice.

President Hassan Sheikh Mohamud, is a member of, along with Abdirahman Abdishakur Warsame and Sharif Sheikh Ahmed, the Alliance of Somali Presidential Candidates. He criticised the incumbent President Mohamed Abdullahi Mohamed for not putting effort into winning the maritime dispute with Kenya.  The irony is that a group of Somali politicians who came to the political scene on nationalist sentiment against the Ethiopian intervention in Somalia had signed a Memorandum of Understanding and plunged Somalia into a maritime dispute that Kenya has cunningly manufactured. If the same people, who put Somalia in a difficult legal position, are seeking the Somali Presidency, there is no guarantee that Somali leaders will not sign agreements that damage Somalia’s territorial integrity.