Kenya v Somalia Maritime Dispute: The Difficult Task of Drawing a Line in the Sea 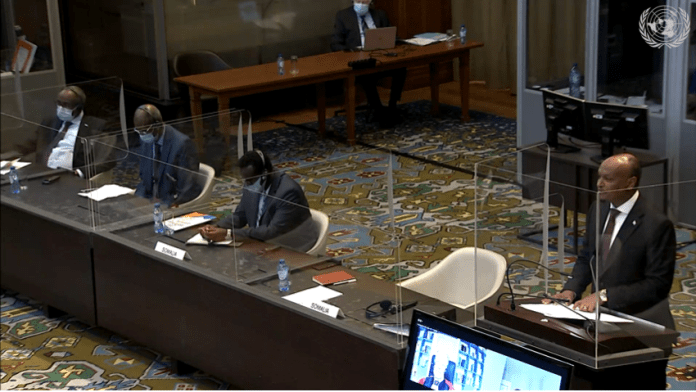 Hearings started at the International Court of Justice on Monday for a maritime boundary dispute between neighbours Kenya and Somalia. However, Kenya refused to take part in the oral proceedings and the court will only examine written evidence provided by Nairobi.

“The court regrets the decision of Kenya not to participate in the oral proceedings,” said presiding ICJ Judge Joan Donoghue in The Hague.

The dispute centres on the maritime boundaries between the two Horn of Africa neighbours, with some 100,000 square kilometres contested, approximately the size of Iceland.

Lawyers acting for the Kenyan government had blamed difficulties preparing for the case, which Somalia filed at the ICJ in 2014, and raised concerns about using video-link.

The court decided to carry out hybrid hearings, allowing four representatives of each party in the courtroom, given the Covid-19 pandemic, and refused requests to further delay the case.

Kenyan authorities submitted a 175-page “position paper” for consideration before Monday’s hearing and asked to be allowed to address the court, before the start of proceedings. The judges denied these requests.

Somalia claims a maritime boundary that runs equidistant or on a median line from the corresponding land border, while Kenya asserts a parallel line of latitude extending out from the land border.

Kenya proclaimed that boundary in a 1979 decree by former President Daniel Arop Moi, claiming fishing rights over natural resources from the water, seabed or subsoil.

A ruling on the disagreement could help determine the rights to exploit oil and gas resources in the area, with Kenya having licensed blocks in the disputed maritime area. The Somali government started its first offshore licensing in August 2020, but said it would not offer any blocks in the disputed area until a ruling by the ICJ.

“Oil companies cannot predict what the final outcome of the boundary will be,” said Constantinos Yiallourides, an expert on maritime boundaries at University of Aberdeen.

“The dispute may in fact lead to a change of jurisdiction in which case their exploration and exploitation will not be guaranteed,” added Yiallourides.

Lawyers for Somalia have argued that the country was unable to previously object about the contested area due to instability and the “near total disintegration” of the state caused by years of civil war.

Both Kenya and Somalia are signatories to the UN Convention on the Law of the Sea (UNCLOS) and if they cannot come to a negotiated settlement, a third party such as the ICJ can carry out a boundary delimitation, to decide where the water border lies.

Maritime boundaries are made up of different components, which can often make such disputes tricky, especially when oil and gas concessions are involved.

“This is a very complicated issue, we’re talking about both the territorial sea and the limitations of continental shelf both within 200 nautical miles and beyond,” said Kai-Chieh Chan, a researcher at Paris II Panthéon-Assas University, who has written about the case at the ICJ.

Since a negotiated settlement appears now to be impossible, it is likely that the ICJ will carry out the delimitation exercise. There is not one procedure for this, but past cases have helped establish specific procedures and approaches, according to Yiallourides.

“Courts and tribunals will try to maintain consistency with existing case law,” said Yiallourides, who is a fellow on law of the sea at the British Institute of International and Comparative Law.

The court will apply a number of steps, including identifying the exact nature of overlapping claims, determining any pre-existing agreements and carrying out a delimitation.

In the Kenya-Somalia dispute, a ruling on the delimitation will eventually come down whether a median or equidistant boundary or parallel line is the fairest.

“That’s the million dollar question,” said Yiallourides, explaining that a number of different factors will be taken into consideration by the judges.

All other things being equal, a median line, such as claimed by Somalia, is the default tool used for delimitation under UNCLOS.

“The article basically says the delineation or delimitation is based on a median line or the equidistant line, but this line can be modified if there are special circumstances, justifying such modification,” said Chan.

Yiallourides said the court is “free to apply a different method” if it sees fit, and in some cases an equidistant line has been set aside. Although equidistant delimitation has become the standard approach, and indeed such an approach “appears possible and recommended”, he added.

The delimitation will, nevertheless, be adjusted for fairness, taking relevant circumstances into account, as well as proportionality, that marine space is allocated in an equitable way.

“It might be that the median line, it can be drawn in a way that’s unfair to one party, so fairness is one element,” said Chan.

Any explicit or implicit past agreements between the two countries, as well as fishing practices and colonial era delimitations are all aspects that could be taken into consideration.

Furthermore, oil and gas concessions offered by both Kenya and Somalia could actually have an impact on the ruling, according to Yiallourides.

“Any activity that could cause a permanent modification of the seabed, that is drilling of wells, establishment of installations, and appropriation of petroleum, would be contrary to the provision of UNCLOS, and hence an internationally unlawful act,” said Yiallourides.

Even granting oil licenses could potentially be viewed as a move endangering a final agreement, violating the principle that states must exercise restraint while a dispute is resolved.

The ICJ hearings had been expected to continue until Friday with Kenya’s oral arguments, and a second round of oral arguments on 22 and 24 March. Although Kenya’s lack of participation is likely to change that.

ICJ judgements are final and cannot be appealed, however, in reality decisions are difficult to enforce.