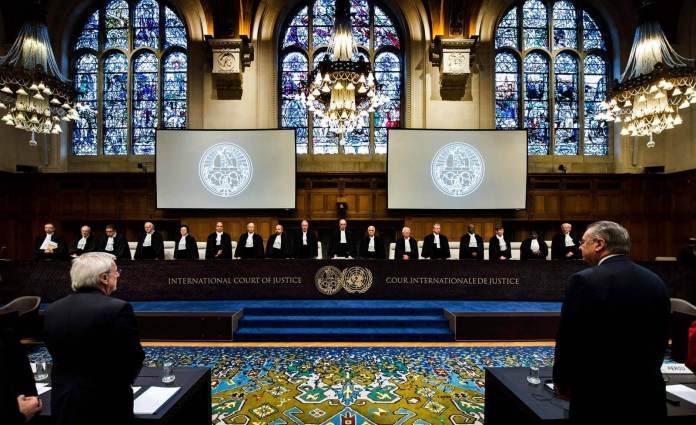 Somalia has been pushing the ICJ to issue a ruling over the 100,000 km2 of disputed maritime territory in the Indian Ocean since 2014, when it first filed a case with the Court.

The International Court of Justice (ICJ) launched hearings for a maritime boundary dispute between Kenya and Somalia on Monday. However, Kenya refused to participate in the oral proceedings and instead said that it would only submit written evidence.

Somalia has been pushing the ICJ to issue a ruling over the 100,000 km2 of disputed maritime territory in the Indian Ocean since 2014, when it first filed a case with the Court. Somalia’s maritime border claim continues along a “median line” from the two countries’ shared border, while Kenya argues that this border line extends horizontally from their border. Kenya contends that since Somalia lodged no official protests between 1979 and 2014, the two countries had come to an informal agreement on where the border lies.

Kenya’s claim officially dates back to 1979, when erstwhile President Daniel Arop Moi decreed that Kenya holds: “sovereign rights for the purpose of exploring, exploiting, conserving and managing the natural resources, whether renewable or non-renewable of the water column, the seabed, and the subsoil thereof” and “sovereign rights with regard to other activities for the economic exploration and exploitation of the zone, such as the production of energy from the water currents and winds”.

There are a number of crucial oil and gas resources located off the coast of the Somalian state of Jubaland, which is home to the country’s port of Kismayo. In February 2019, Kenya recalled its ambassador to Mogadishu after Somalia attempted to auction oil and gas exploration blocks in the area. Kenya, too, already has licensed blocks in the disputed zone and the Somali government began offshore licensing projects in August 2020. Since the incident in 2019, however, Mogadishu has said that it will not offer licensing for any blocks in the disputed region until the ICJ rules on the matter.

Kenya did initially express some interest in participating in the ICJ hearings, but then said that it had concerns about conducting them via videoconferencing. In response, the ICJ agreed to conduct hybrid hearings, with only four representatives from each side in allowed the courtroom due to COVID-19 restrictions. However, Kenya then requested that its representatives be allowed to present a 175-page “position-paper” that they had prepared. When this request was turned down by the ICJ, Kenya refused to participate in the oral proceedings altogether.

Following Kenya’s refusal to participate in the hearings, Somali official said, “We are deeply concerned that Kenya has decided not to appear at these hearings,” and said that Nairobi’s decision was “inconsistent with the rule of law”. He added that Kenya has “has no grounds to complain about its treatment by the court”, as the ICJ had previously approved Kenya’s requests to postpone the case three separate occasions, which have cumulatively resulted in an 18-month delay.

Both countries are signatories of the United Nations Convention on the Law of the Sea (UNCLOS) and can thus technically empower the ICJ to determine the maritime border if they are not able to come to a mutually agreeable demarcation between themselves.

The UNCLOS has traditionally ruled in favour of median lines, such as that claimed by Somalia, as opposed to parallel lines, such as that claimed by Kenya. Therefore, it is not entirely surprising that Kenya has been wary of participating in the ICJ’s oral proceedings, as Nairobi is wary of placing its trust in a Court that appears likely to not rule in its favour. Moreover, ICJ rulings are conclusive and cannot be appealed, and although enforcement is another matter entirely, Kenya is cognisant of the detrimental impacts of having its maritime claim delegitimised in an international court of law.

Against the backdrop of the ICJ hearing, fishermen in Kenya’s Lamu County, which lies along the country’s northern coast, held a protest calling on both countries to “explore other obvious channels, including the Intergovernmental Authority on Development (IGAD), the African Union, or even our Elders, who have settled such differences for centuries”. Is’Haq Abubakar from the Save Lamu movement said, “The people of Lamu and our brothers in Somali have coexisted for centuries and continue to consider the current boundaries simply as colonial lines drawn neither to the interest of Kenya or Somali people.”

Aside from maritime disputes, the two countries have also been embroiled in diplomatic disputes in the recent past. In December, Somalia recalled its ambassador to Nairobi and demanded that Kenya’s ambassador to Mogadishu return home, accusing Kenya of interfering in its internal affairs in Jubaland and Somaliland. Somalia contends that Kenya is arming and training Jubaland rebels along their shared border to attack the Somali National Army, a claim that was rejected by the IGAD in January due to lack of evidence.

This week’s hearing at the ICJ further illustrates the fraught nature of bilateral ties between Kenya and Somalia.