Turkey’s Tightrope Between Russia and the United States 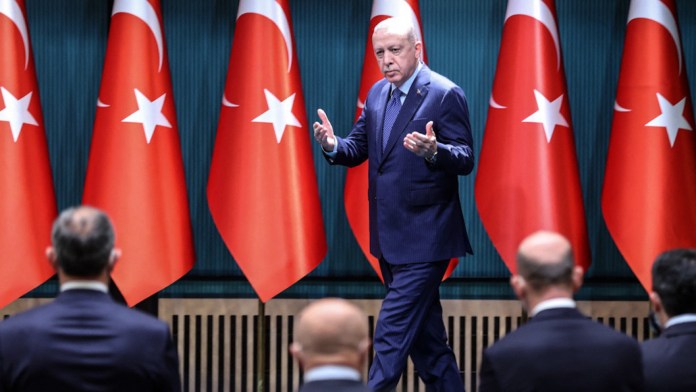 Turkey has been sitting on two chairs, doing geopolitical business with Russia and calling on the United States on a case-by-case basis when interests happen to converge.

One question has been irking Turkish commentators since January: why won’t U.S. President Joe Biden speak to his Turkish counterpart, Recep Tayyip Erdoğan?

All the key world leaders have had phone conversations with the new U.S. president — Russia’s Vladimir Putin included — but Turkey’s president has been given the cold shoulder. Erdoğan must wait until April 22 to talk to Biden, when he is due to attend a virtual climate summit convened by the White House. Even then, a multilateral gathering is hardly the same as a one-on-one call.

Biden’s indifference contrasts with both the rapport his predecessor Donald Trump and the Turkish strongman enjoyed, and also the great lengths the European leadership has gone to in order to engage Ankara.

The recent visit to Turkey by the European Council president Charles Michel and the head of the European Commission Ursula von der Leyen is fresh in everyone’s minds.

Part of the reason that Biden is making a point of ignoring Erdoğan is certainly ideological. Having called Turkey’s president an autocrat during the election campaign, the new U.S. president wants to draw a clear distinction with the Trump administration’s penchant for cozying up to illiberal supremos across the globe.

Biden would like to see the United States regain the moral high ground; hence, he is turning up the heat on the likes of Saudi Arabia’s Mohammed bin Salman (something with which, incidentally, Turkey has no problem).

But that’s not the whole story. In essence, the United States is giving Turkey a taste of its own medicine.

On Erdoğan’s watch, the relationship between the two NATO allies has degraded to a transactional partnership of convenience. Turkey has been sitting on two chairs, doing geopolitical business with Russia and calling on the United States on a case-by-case basis when interests happen to converge. With Trump in power, Erdoğan managed, by and large, to pull it off.

Turkey avoided major sanctions over its purchase of Russian-made S-400 missiles, save the expulsion from the consortium to develop the next-generation F-35 fighter jet.

Now Biden’s team is turning the tables, applying its own version of transactionalism. America will reach out to Turkey if the need arises. Since at present U.S. foreign policy does not prioritize either the Middle East or the Black Sea region, Erdoğan’s services are not required. Let the Europeans deal with Turkey, with the 2016 refugee deal up for renewal and trouble brewing in the Eastern Mediterranean. The United States has other fish to fry.

Faced with this turnaround, Ankara has played the Russia card. Turkey, its government asserts, is the only NATO member that has proven willing and able to check the Kremlin’s expansionism.

Throughout 2020, Turkish drones inflicted heavy defeats on Russia’s proxies in Syria and Libya — the Bashar al-Assad regime and General Khalifa Haftar’s Libyan National Army — destroying large amounts of Russian-made kit. It was the same story in Nagorno-Karabakh, where Turkey used its newly acquired capabilities to insert itself into what Moscow portrays as its privileged sphere of influence.

Ankara is getting bolder about displaying its close ties with Kiev, too.

Ukrainian President Volodymyr Zelensky’s trip to Turkey in October 2020 yielded a joint call for “the de-occupation of the Autonomous Republic of Crimea and the city of Sevastopol, as well as restoration of Ukraine’s control over certain areas in the Donetsk and Luhansk regions of Ukraine.”

Kiev also signed a contract for the purchase of six Turkish Bayraktar TB2 drones, and discussions about joint defense production are still ongoing. In his recent summit with Erdoğan in Istanbul on April 10, held back-to-back with a joint session between the two governments, Zelensky brought up the massing of Russian troops at the border.

Although the Turkish president struck a conciliatory note and called for de-escalation, he also voiced support for Ukraine.

The previous day, it had been announced that two U.S. battleships would cross into the Black Sea via the Bosporus.

In previous times, Turkish policymakers used to complain that a lack of commitment from the United States was leaving their country vulnerable to Russia, and therefore it had no choice but to accommodate its powerful northern neighbor. Now the rhetoric has changed. Turkey is doing the heavy lifting on behalf of the West, engaging the Russians but also speaking from a position of strength.

Although this argument has some supporters in Brussels, it does not really resonate with the Biden administration, and Washington is not prepared to cut Ankara any slack.

Last February, Turkish Defense Minister Hulusi Akar proposed “a package solution” to the issue of the S-400s and the U.S. alignment with the PYD in Syria, a political party-cum-militia viewed in Ankara as an offshoot of the outlawed Kurdistan Workers’ Party (PKK).

He got a polite rejection. The United States is sticking to its guns and demanding that Turkey give up the Russian missiles.

As U.S. Secretary of State Antony Blinken put it in his Senate confirmation hearing, “the idea that a strategic — so-called strategic — partner of ours would actually be in line with one of our biggest strategic competitors in Russia is not acceptable.” Washington is also touting further sanctions against Turkey under the Countering America’s Adversaries Through Sanctions Act, in addition to those imposed at the tail end of Trump’s tenure over the purchase of the S-400s.

With no reset with the United States on the horizon, Erdoğan has no choice other than to stay close to Russia. That is why the Kremlin is not overreacting to Turkey’s overtures to the West or its forays into the post-Soviet space. Despite the wins Ankara scored against Moscow in 2020, it remains the weaker party in the “cooperative rivalry” the two have forged during the past decade.

Russia retains strategic leverage, particularly in Syria, where millions of potential refugees live right next to the border with Turkey.

Erdoğan is unlikely to take gambles of the sort he took in Nagorno-Karabakh at the risk of antagonizing Moscow. That was one of the main takeaways from his summit with Zelensky. Rather, he will press on with a multi-vector foreign policy balancing between the West, Russia, and — increasingly — China (hence the low-key Turkish response to the plight of the Uyghurs and other Turkic groups in China’s Xinjiang region).

The article was originally published on The Moscow Times Website.