Home Gudaha Is There an Ending to the Perpetual Flooding in Mogadishu?
Gudaha

Is There an Ending to the Perpetual Flooding in Mogadishu? 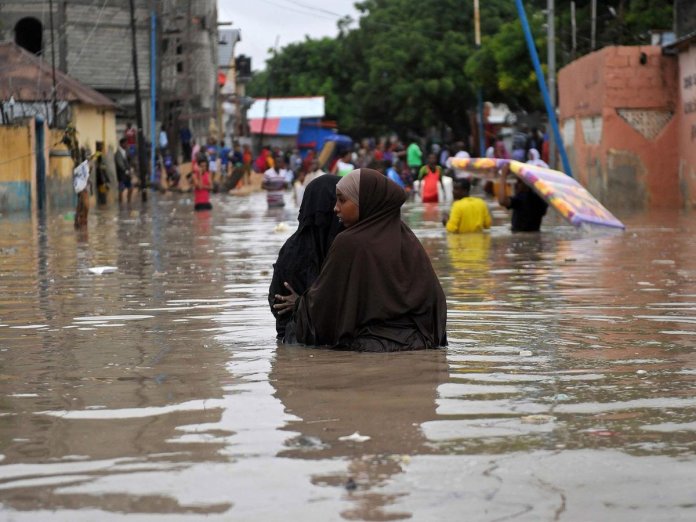 On May 7th, eleven children have died in Mogadishu due to flooding.  In the past few years, similar tragedies continue to recur on a yearly basis affecting the most vulnerable in the city, with no end in sight. As the security situation improves in Somalia, Mogadishu has become a city experiencing exponential growth and rapid development. The city is also a host to a continuous influx of displaced populations fleeing from natural disasters or insecurities in their own towns. Mogadishu’s land mass has almost doubled since 1993 with bulk of the development occurring after 2007. The increased development and urbanization, however, lack any master planning or codified standard for sustainable development.  More specifically, a strategic flood control plan is urgently needed to address the recurring flood disaster.

What Changed In Mogadishu?

Mogadishu has undergone an enormous change between 1990 to 2019 in terms of land mass and population density. Figures 1 and 2 illustrate the city’s expansion captured via satellite imagery. A color composite is used to highlight the difference in vegetation, urban, soil and water. Two roads are also shown for reference in the center of the city (Warshahada Road and Hawl Wadaag Street). From Figures 1 and 2 below, one can see that many undeveloped areas (red and brown areas) within the city limits in 1990 were densely developed by 2019.

Satellite imagery from 1990 (Figure 1) before the civil war in Somalia, along with testimonials indicate that developments within the city limits ended at Warshadaha road (also known as 21st October). There were only sparse developments north of the road. Fast forward to today, there is sizeable development north of the Warshadaha road. Although the city expanded all around, the most significant expansions are in the northeastern and northwestern parts of town. The population within the city has also doubled since the 1990s and continues to grow as Somalis from other parts of the country and the diaspora relocate to Mogadishu.  Some estimates put the population of the city above 2 million residents. 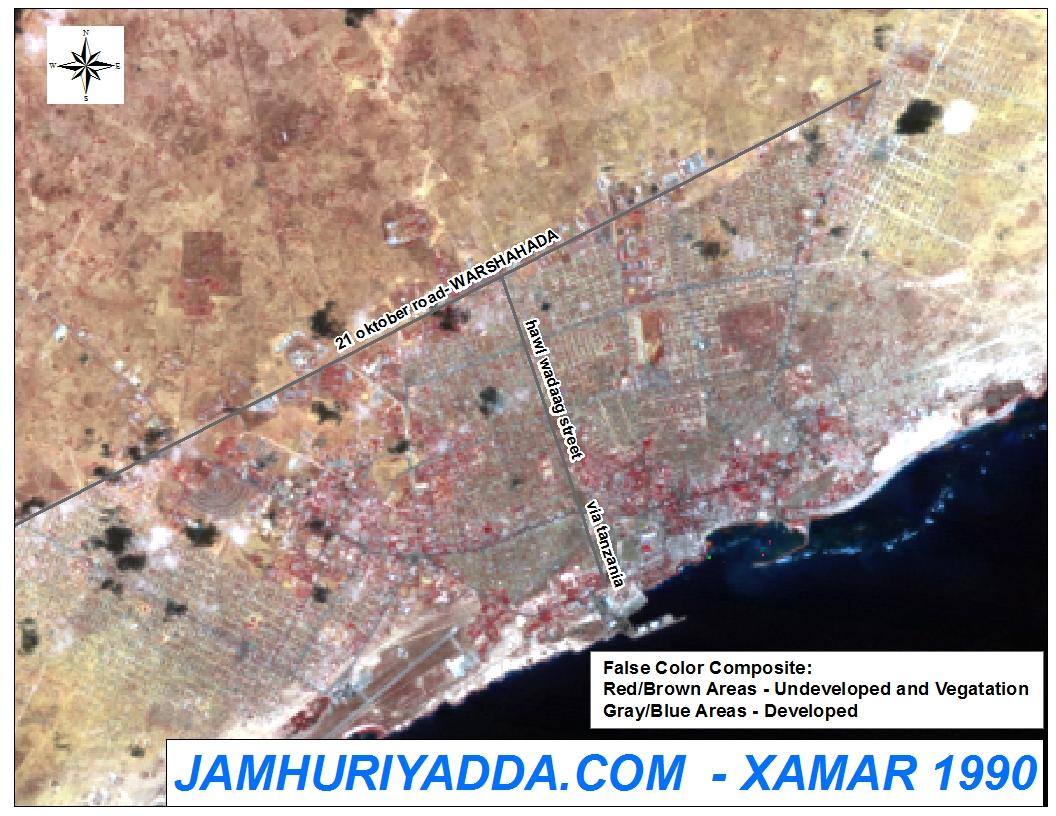 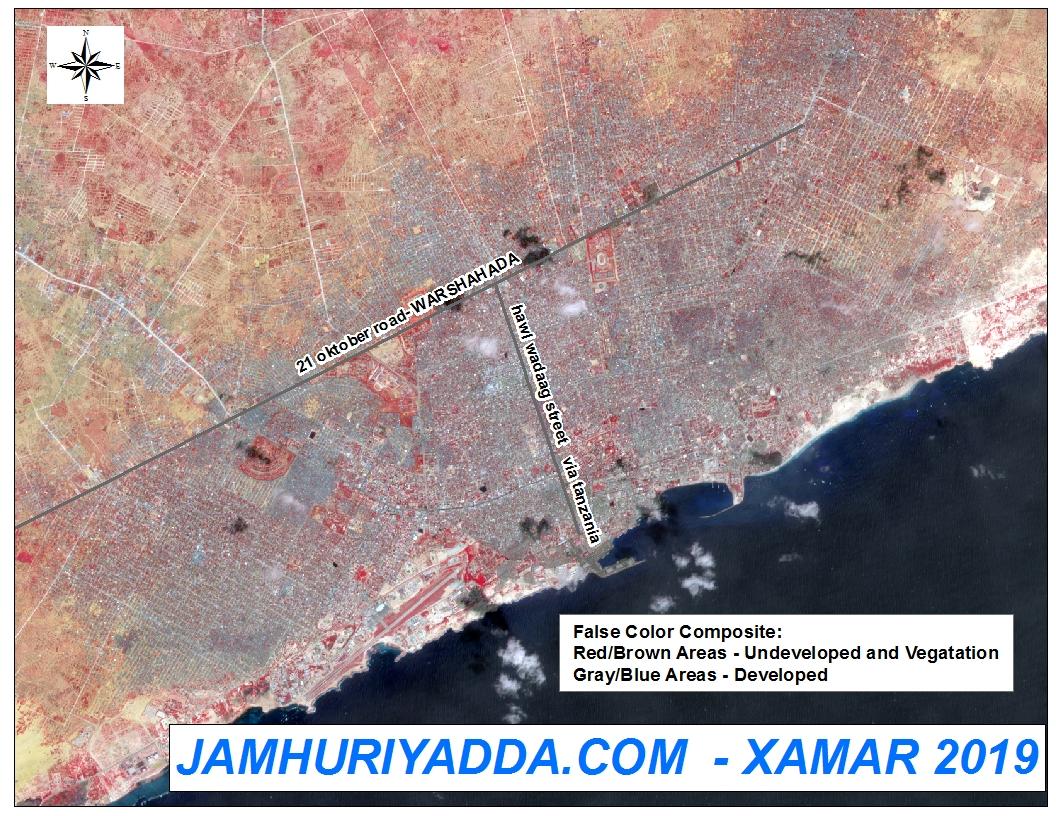 To put it into prospective, the natural drainage pattern in the vicinity of Mogadishu is from the northwest to southeast direction towards the Indian Ocean. There are few exceptions, for example near Garas Ballay area where flow is directed both to the north and south. Within the city the natural flow pattern is disturbed by developments at some locations. Development acts as an obstruction to the direction of flow as it moves downstream. The storm water at these obstructions is either trapped or redirected to another location. Roadways typically convey most of the storm water as runoff from the building roofs and homes are directed towards the roads. To my knowledge, no roadway drainage infrastructure is currently in place in Mogadishu.

Why are the Floods Worse Now?

The biggest issue with urbanization is the increase in the impervious surfaces (i.e. buildings, asphalt, concrete). Storm water that used to infiltrated into the ground is no longer able to and will be directed downstream based on the elevations or just pond. There is a direct relationship between an increase in impervious surfaces and an increase in flooding.  Scaling this issue up to cover the entire city and one can see how this becomes a major impediment. Majority of the homes direct their storm water directly to the roads and there should be no surprise that all the roads are experiencing large flooding and some are completely eroding away. The roads in certain parts of the city almost act as channels and convey large quantities of storm water making it impassable. Reconstructing the road with new asphalt or adding more sand and gravel is merely a bandage that will certainly fail during the next rain event. Even if the patch work does not fail, the flooding problem is passed down to the next neighbor.

How can we fix this deadly problem?

The city and its leaders must wake up to the disasters that continuously impact the city on a yearly basis. From a flood risk management prospective, there is an urgent need for a strategy to mitigate the city’s flooding risk.  Any effective effort necessitates to start with a regional planning study with a focus on drainage.  A master plan is needed to identify and quantify all the flood prone areas within the city.  I show in Figure 5 below an example that I generated for the city of Rio De Janeiro using two-dimensional flood modeling.  Two-dimensional modeling could be used to pinpoint where storm water is concentrated or trapped to, and to identify solutions to mitigate the flood hazard.

What to expect from the initial planning study?

The results of the planning study would facilitate the generation of a blueprint for the city’s flood risk management.  The outcome of the planning study is a list of projects to be constructed with a priority ranking based on their urgent needs.  It is important to first identify all the issues and severity prior to executing any construction projects. Some of the potential projects could include:

Implementing some of these projects will not only improve the city’s water resource management but also will reduce the flood hazard and loss of life.  Additionally, this will optimize the ongoing expansion of the city and increase property values The annual flood damage to homes and vehicles are currently not quantified, but if tabulated for the last 10 years , it would easily cover most of these project cost. The flooding hazard also presents the risk of water borne diseases that are caused by standing water.  Currently the residents and particularly children are subject to these diseases during the rainy season.

Global weather changes have affected the seasonal weather conditions and precipitations worldwide.  Therefore, any project to be implemented should also consider climate change. This way not only is the city infrastructure prepared for the current conditions but can also mitigate a hypothetical worst-case scenario.

The flooding situation in the city needs to be an urgent priority for the Banadir Administration and the federal government. The drainage issues in Mogadishu will not go away on its own and will progressively cause worsening property damages as the water continues to erode structures. With flooding issues widespread as noted, the ideal place to start would be to generate a citywide plan and first identify all the areas that need solutions. Once all the risks have been identified and quantified then a mitigation plan could be implemented.