Kenneth Kaunda, the Philosopher King who Fell with Dignity 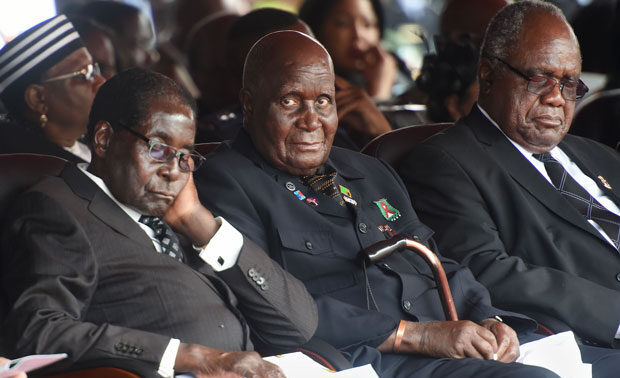 Zambia’s first president was a flawed leader, but his legacy of inclusiveness and African unity survive in political structures to this day.

When Zambians go to the polls on 12 August, President Edgar Lungu will hope for re-election. He was just 35 years old when Kenneth Kaunda’s 27 years in office ended in 1991. But, like all the presidents since, he bears the marks of the Zambian political formation put in place by the nation’s first.

In fact, Lungu is the first head of state since Frederick Chiluba, who took power in 1991, not to have been a member of one of Kaunda’s governments. The homogeneity and inclusiveness of Zambian politics means that parties change names, but they all have a similar genealogy. Zambian politics frequently devolves into a choice among personalities rather than policies.

Those policies in any case have not changed in their foundations since independence in 1964. The country depends on copper exports. Ensuring the mono-economy runs sufficiently well to provide stability and some prosperity has been the goal of every president.

But a political class in which everyone knows everyone else is a by-product of Kaunda’s Humanism, a homespun but extensively elaborated social philosophy of inclusiveness. What Kaunda meant by Humanism fills several books that he wrote, but it consists largely of a Christian social democracy that coheres around a core principle of human equality within a constantly propagated national unity.

That unity was important in that Zambia entered independence as a composite of 72 indigenous ethnic groups – with 72 distinct languages, not dialects – in addition to the white and Indian communities. It was made urgent a year after independence when white-minority-ruled Southern Rhodesia unilaterally declared independence, aided and abetted by Apartheid South Africa.

Suddenly, the new Zambia was held hostage by the white south. All the region’s transport routes, developed in the first instance by Cecil Rhodes, ran from Zambia southwards to the sea. Getting the copper out to world markets and imports in became subject to economic squeezes administered for racist reasons.

For Kaunda, this posed a huge problem, for inclusiveness also extended to fellow Africans fighting for liberation. The president had to run the tightrope of negotiating access to the sea while remaining determined to host liberation groups who established their exile headquarters in Lusaka. Because of this, Zambia’s capital became the frequent target of white commando raids and air-raids as both white Rhodesia and white South Africa sought out enemy fighters and took the opportunity to teach Kaunda a lesson.

He was reluctant to learn that lesson. Commentators called it the high price of principles as it meant the economy was never able to develop. But the Zambian people stoically bore the cost of struggle against white states. From 1965 clear through the 1980s – for although Zimbabwe came into majority rule in 1980, South Africa was still bound by Apartheid until 1994 – almost all consumer commodities were in short supply. It was accepted that people would not be at work – even though employment itself was scarce – because they had to hunt for cooking oil or sugar. Productivity was always at a low level as a result. Electricity and water were unreliable. Public transport was, at best, eccentric.

Somehow, the country held together. International observers saw in this the fruits of Kaunda’s wisdom – never mind the installation of a one-party state in 1972 and suppression of university unrest in 1971 and 1976, the latter leading to the temporary closure of the university, the imprisonment of student leaders, and the deportation of white lecturers who had supported them.

China had already been building the Tazara Railway to give Zambia a transport route to the sea that was not dependent on the white south, instead reaching the Indian Ocean at Dar es Salaam. It never worked to its intended capacity, but China retained a high respect for Kaunda. Chairman Mao delayed announcing the grand Chinese Three World Theory – basically a conflation of non-alignment and Chinese leadership – till 1974 to coincide with a visit to Beijing by Kaunda. They wanted to associate the theory with the African “philosopher king”. When Kaunda died on 17 June 2021, he was nowhere mourned outside Zambia as much as in China, where the official tributes and the newspaper editorials were fulsome.

In his time, Kaunda was hailed as a philosopher king not just by China but many others too, including the Fabian wing of Britain’s Labour Party. Kaunda had been influenced by the ideas of moral economy advanced by economic historian R.H. Tawney and ideas of the welfare state advanced by theorist Harold Laski. He was also moved by the doctrine of pacific resistance advanced by Gandhi. Kaunda’s deployment of this approach was paraded as being principled in the face of white southern aggression but, in reality, Zambia had no armed forces that could have offered equal battle with those of Rhodesia and especially South Africa. As with much of Kaunda’ principles, it was finally boiled down to pragmatism.

As the 1980s advanced, this pragmatism and increasing one-party authoritarianism were becoming irksome. The complaint was that Zambia, having sacrificed so much to help Zimbabwe become independent, now lagged way behind Zimbabwe’s economic dynamism.

But the last straw was the fall of the Berlin Wall in 1989. Inspired by the dramatic collapse of a gigantic monolithic state and party regime, university students again rose up in 1990. This time, the population erupted in following the student lead. Everywhere people demanded free multi-party elections – though unlike in Berlin and Gdansk, television crews never came to film entire cities like Kabwe in the streets shouting for Kaunda to step down.

Kaunda played for time, conceding that multi-party elections should be held, but not till 1991, suggesting that the remainder of 1990 and 1991 should be given over to the formation of new parties. He hoped the opposition would fragment while maintaining his own party unity. But the opposition cohered into an insuperable force led by Frederick Chiluba, the leader of the Zambia Congress of Trade Unions.

Two weeks before the elections, Kaunda came to the 1991 Commonwealth summit in neighbouring Zimbabwe. He, but also all the other state leaders, were eclipsed by the appearance of Nelson Mandela. I saw Kaunda there. He was noticeably pale. It seemed he knew he would be returning to Zambia to face electoral defeat. I followed him and observed the 31 October elections.

After 27 years in office, Kaunda fell. But his demeanour and dignity in falling suddenly transformed how Zambians saw him. The television cameras filmed him graciously escorting the incoming President Chiluba and his wife around State House, pointing out the artworks and meeting rooms – and doing all this with a poise that seemed not at all any part of bitterness.

Then we watched as he stepped outside and went to his car. He took off the presidential pennant that had flown on the side of its bonnet, looked at it briefly, then put it in his pocket as a keepsake. Then asked the driver to take him to his humble non-presidential home.

It was as if nothing became him as much as leaving office with such dignity. And from that moment to his death, he became the moral and elder statesman of the country.

I met him again in 2005 at Cambridge. He had come to witness the debate between myself and Lord Carrington, Margaret Thatcher’s Foreign Secretary who had chaired the final independence talks for Zimbabwe – doing so ruthlessly and earning the displeasure of Kaunda as well as that of many African leaders. I brought the two men together and they reconciled 25 years after the Lancaster House talks that, with huge difficulty, had agreed independence and the end of white rule in Zambia’s neighbour. If forgiveness was part of the Humanist ethos it was that day on display.

Kaunda unified the nation, he resisted the white south, he was honest and open about AIDS claiming lives in his own family, and he accepted finally a dramatic democratic outcome leading to his own overthrow with an elegance rare in Africa. He put forward a philosophy of egalitarian inclusiveness that survives in political structures to this day. He died aged 97. Even aged 96 he would, with the help of a walking stick, come dancing into meetings as if he had all the vigour and all the time in the world.

The article was originally published on African Arguments Website.