Egypt: Is the Sisi Regime Using Turkey as Leverage With Its Gulf Allies? 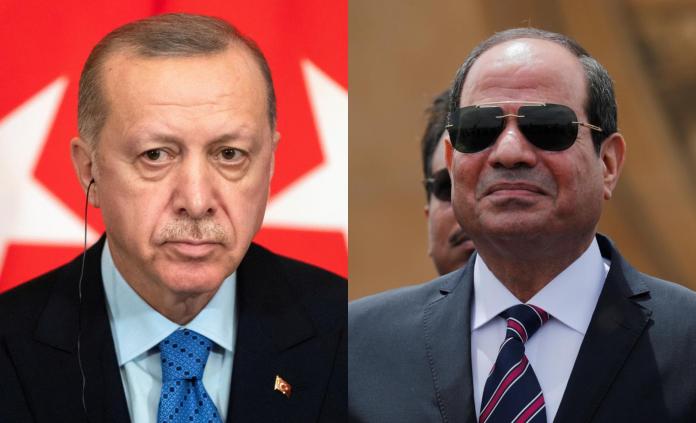 The author is a research assistant professor at Ibn Khaldum Center for Humanities and Social Sciences.

Recent Turkish-Egyptian talks appear to have triggered the reaction Sisi wanted from his Gulf allies, who are now paying closer attention to Cairo

In a first since Egypt’s 2013 military coup, a Turkish delegation headed by Deputy Foreign Minister Sedat Onal arrived in Cairo in May for a two-day round of exploratory talks.

Afterwards, the two sides issued a joint statement highlighting the “frank and in-depth” discussions, which addressed bilateral and regional issues, including Libya, Syria, Iraq “and the need to achieve peace and security in the Eastern Mediterranean region”.

The statement was carefully calibrated to create modest expectations. It kept the door open to further talks, but tied that prospect to an evaluative process and an agreement on “next steps”.

But while Turkey’s goals and intentions for this process are clear, the same cannot be said for Egypt. By opening up to Turkey, Cairo may be aiming to increase its value in the eyes of its partners, seeking leverage over its allies while also avoiding an escalation with Turkey amid the intensified Ethiopia dam dispute.

After the May talks ended, two significant developments occurred. On 14 June, Egyptian authorities upheld 12 death sentences, including for several senior Muslim Brotherhood figures. While some observers described this step as provocative, others viewed it as a lost opportunity to reconcile with the Brotherhood.

While Turkey has largely avoided the issue, possibly to avoid giving Egypt a pretext to sabotage talks, Ankara confirmed in April that it remains opposed to states declaring the Brotherhood a terrorist organisation. In addition, a recent article by a Turkish government adviser criticised the Egyptian executions as unacceptable.

Is this a coincidence? Probably not: none of the three countries have any interest in an Egyptian-Turkish rapprochement, and they are highly motivated to sabotage it. While bin Salman has moved to stall rapprochement with Ankara, Greece has moved to quash it, and the UAE is believed to be standing behind a new anti-Turkey lobbying effort in Washington calling itself the Turkish Democracy Project.

After meeting bin Salman in Sharm el-Sheikh last month, Sisi tweeted a casual photo of the pair relaxed and smiling, and highlighted that the two countries were on the same page on regional and international issues. Egypt was a member of the Saudi-led quartet that severed relations with Qatar and imposed a blockade against it in 2017. Yet, as Riyadh worked to reconcile with Doha earlier this year, it did not coordinate with Cairo or incorporate its interests.

The reconciliation between Riyadh and Doha was supposed to lead to the normalisation of relations between Turkey and Saudi Arabia, but that has not happened, for two key reasons. Firstly, the Iran nuclear deal has not yet been reactivated, meaning Riyadh does not need to join forces with a regional power against Iran. Secondly, the US has not ramped up pressure on bin Salman, which would make him more eager to team up with Ankara to counter that pressure.

In the current situation, normalisation between Egypt and Turkey would isolate Saudi Arabia. This is why bin Salman was likely pushing his Egyptian counterpart to slow down the rapprochement.

Mitsotakis, meanwhile, had two main points on his agenda when he met Sisi: to convince Cairo to sign a full maritime boundary delimitation agreement over oil and gas claims in the Eastern Mediterranean, and to protest the exclusion of Athens from the Berlin Conference on Libya. The second point for Greece was a call for the departure of all foreign troops and mercenaries from Libya.

An East Mediterranean delimitation agreement with Greece would mean blowing up any chances for a future Egyptian-Turkish delimitation deal, while the second demand was aimed at further pitting Cairo against Ankara on the Libya issue.

As for bin Zayed, the crown prince recently attended Sisi’s ceremony to inaugurate a strategic naval base on the Mediterranean near the Libyan border. Since the UAE-backed military coup in 2013, MBZ has never missed an inauguration of any newly built military base in Egypt. Abu Dhabi is also believed to be the main financer of Sisi’s mega arms deals with western countries in the last few years.

His attendance at the military base inauguration near Libya sent two messages: that Abu Dhabi retains significant influence over Egyptian politics, and that the UAE is still the leading force when it comes to the Libya crisis, where it continues its disruptive policies.

It would appear that the Turkish-Egyptian talks triggered the reaction Sisi wanted from his allies. Now that they are paying more attention to Cairo, the talks may start facing serious challenges. If Egypt begins making unrealistic demands while not offering reciprocal concessions, this would be a sign that it aims to prolong the process before shutting it down completely.

While Egyptian media has recently toned down their criticism of Turkey, there has been no word on closing down Gulen-affiliated media outlets in Cairo. Moreover, Egypt’s foreign minister recently started making demands – such as Turkey should stop threatening Arab national security, should withdraw from Libya, should withdraw from this country and that country – on behalf of other Arab states. While Turkey will disregard such rhetoric, it sheds light on Cairo’s strategy.

At the same time, the recent meeting between Egypt’s intelligence chief and Libyan warlord Khalifa Haftar; Haftar’s threats to “liberate” Tripoli, by force if necessary; and the presidential candidacy of UAE-backed Libyan scholar Aref Ali Nayed, are all threatening again to turn Libya into a ground of conflict between Turkey and Egypt, rather than a ground of shared interests.