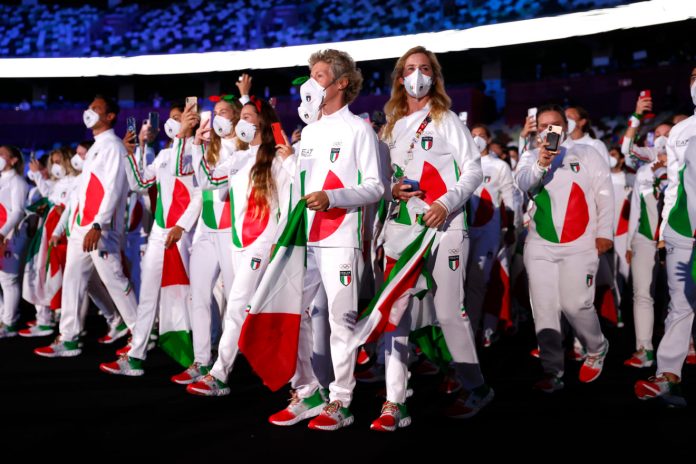 Record-breaking success in Tokyo raises questions of who should be considered Italian.

A record-breaking medal tally for Italy’s Olympic team in Tokyo has revived a debate on citizenship rights back home.

Footage of Italy’s top athletes — who exceeded all expectations by winning 40 medals at the games — showed Italians a side of the country they rarely see on television: its racial and ethnic diversity.

Around 15 percent of Italy’s Olympic team were born abroad or have parents born abroad. On the athletics team, which includes categories like track and field, that figure rises to almost 40 percent.

The diversity of the team has rekindled ongoing discussions in Italy over who is granted citizenship, with Italian Olympic Committee President Giovanni Malagò crediting the “multi-ethnic team” for Italy’s success and calling for an acceleration to the citizenship applications of professional athletes.

Italy’s citizenship laws have long created hurdles for athletes not born in the country.

That’s meant that a child born in Italy to immigrant parents is not recognized as a citizen and cannot compete under the Italian flag at an international level. Non-citizens can apply for citizenship at the age of 18 but the process can take up to three years, by which time many athletes will have either given up the sport or chosen to represent another country, according to Malagò.

The issue has the potential to create headaches for professional teams. Track and field sprinter and double gold medal winner Marcell Jacobs, born in the U.S. to an Italian mother, had Italian citizenship from birth. But his teammate in the relay and fellow gold medal winner Fausto Desalu, born in Italy to Nigerian parents, had to wait until he was 18 to apply.

Malagò has called for a “sports jus soli” to remove what he calls a “Dante’s Inferno” of bureaucratic red tape and give athletes Italian citizenship “one minute after their 18th birthday.”

Interior Minister Luciana Lamorgese came out in favor of tackling the issue, saying she hoped “a political consensuscould be found.”

“When you see these young Olympians who have honored our country, it shows that Malagò has a point: We must make them feel integrated into our society,” said Lamorgese, an independent.

Politicians on the left, meanwhile, say citizenship shouldn’t only be made easier for those with the potential to achieve glory in the global sports arena.

The center-left Democratic Party has vowed to open a debate on the issue in parliament in September. “The Olympics confirmed what we have maintained for some time,” the party tweeted, calling citizenship a “right” rather than something to be “earned.”

“Rights are for all, they cannot be for certain special categories or dependent on winning medals,” said Nicola Fratoianni, leader of the Italian Left party. “They must apply to all children, whether they grow up to be Olympians or doctors or factory workers.”

A legislative proposal to offer citizenship to children of immigrants who have completed three years of schooling was passed in the parliament’s lower house in 2017 but blocked in the Senate. More than 1 million children currently live in Italy without citizenship rights.

The far-right League party has vowed to block the proposal again if necessary. Citizenship “is a status, not a right,” Nicola Molteni, an MP for the party and junior minister in the interior ministry, told La Stampa. “The jus soli will never pass. And the League is the guarantee of this.”

Reviving the initiative won’t be straightforward: The legislation won’t get the support of the government, a grand coalition led by Mario Draghi that spans the political spectrum and includes the far right that has vowed to block it. But it could be brought to parliament as a party initiative, and some are hopeful renewed public interest can make a difference.

Giuseppe Brescia, an MP for the anti-establishment 5Star Movement who shepherded the citizenship law through the parliament’s lower house, said he was ready to restart the process, writing on his blog that he “hoped Malagò’s words can have an effect on public opinion and in parliament.”

“It would not be simple but in theory, the numbers in parliament should be there,” Fratoianni said. “They are the same parliamentarians that supported the previous center-left government led by Giuseppe Conte. It’s not impossible, but it will take courage. This is the moment for jus soli.”