PM Roble is Making the Same Mistakes as His Predecessor “Kheyre” 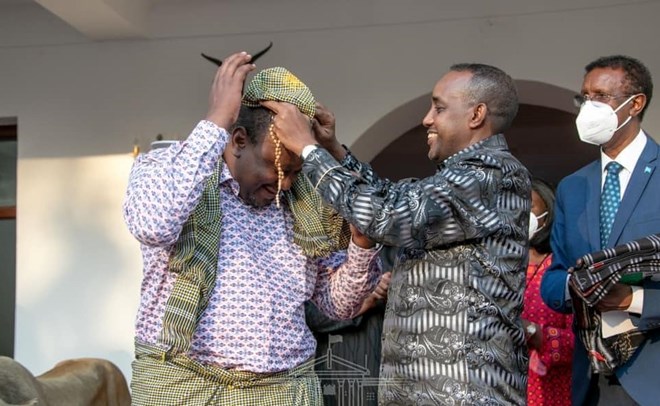 Mr. Mohamed Hussein Roble was largely an unknown individual before his appointment as Prime Minister; with no experience in public office, he nevertheless was given a chance to shine as the head of the cabinet. If he would have remained in his duty as caretaker of the elections and the transition period, his foray into Somali politics would have likely been a success. Unfortunately, he got ahead of himself and became too big for his boots and thus fell into the same trap as his predecessor.

As a political novice the key is to be willing to learn and familiarize oneself with one’s current role–completely know the ins and outs of it–before concluding you’re ready to move on to bigger responsibilities. However, with less than a year in office PM Roble envisioned that he himself could take a shot at becoming the next President of Somalia. Perhaps he was foolishly encouraged by some of his clansmen that he was ready for the task and therefore decided to take hold of the opportunity without careful consideration whether the encouragement and suggestions were without merit. Much like his predecessor, former PM Kheyre, he jumped the gun too soon and grossly miscalculated his odds. Kheyre, after enjoying three and half years of uninterrupted authority, became arrogant and openly challenged his boss with the intent to run for president. Of course, the proper way to have gone about this would have been to resign and then to announce his presidential ambitions with his legacy and name still intact. However, Kheyre would decide to forge ahead in a brazen show of deviance and betrayal. Contrary to both his ambitions and expectations, he wound up being fired and unceremoniously chased down Mogadishu’s main boulevard during a protest by the opposition.

Rookie Mistake #2: Not Knowing the Political Landscape or History

Due not being familiar with the political landscape, directly linked to an obvious lack of experience, Roble saw an opportunity to get closer to Uhuru Kenyatta and to stabilize the relationship with Kenya so they could assist him with his presidential goals. What he didn’t consider is that Kenya was perhaps using him for their own political gain as well, especially regarding their pending case at the International Court of Justice (ICJ) as well as the Khat ban.

Most surprising, however, is his inability to see just how fraught the relationship between Somalia and Kenya has become over the years. Most Somalis resent Kenya and her numerous violations which include illegally obtaining land and sea that belongs to Somalia, that Kenyans regularly bombard and kill innocent Somalis and their herds but claim this is fighting with Al-Shabab.

Kenya has been taking advantage of the opaque and intermittent communications with Roble and others through promoting a false impression to the ICJ that both countries are currently in productive discussions on the disputed territory and thus indefinitely postponing a decision resolving the matter. If it wasn’t for the Memorandum of Understanding (MOU) signed by the former Minister “Abdishakur” of Omar Abdirashid’s Government, the court would have long ago reached a decision that likely would have been favorable to Somalia. Kenya hopes to employ the above strategy with Roble as well by asking him to sign the joint declaration on Fisheries and Blue Economy.

President Farmaajo decried official directives to the PM, stating that no one in the government can sign an agreement in bilateral relations between Somalia and any other country whether it’s economic or political during this lame duck session. This fell on deaf ears, as the PM still travelled to Mombasa with this knowledge and met with Uhuru. It was outside of usual protocol and duties as PM for Roble to be seen gifting Uhuru a macawis and koofi (Somali symbolic men’s sarong and hat) on television screens all over and then even assisting him on putting the gifted garments on. The PM should realize that constitutionally such visible state visits are to only be conducted by the President and in no capacity is he allowed to be signing any binding bilateral agreements unless specified and provisioned by the President himself. Had this not been a Government in transition, Roble would have seen himself removed from office like his predecessor former PM Kheyre.

If PM Roble has learned a thing or two, it should be that there is no honor in self-interest and arrogance. The behaviors he has exhibited do not bode well for a future run as President or for his general credibility. Therefore, it’s in the interest of the PM to continue working with the President and oversee the elections as instructed, he shouldn’t be lured by the sham elections of the Regional States – this endeavor will provide him a good standing and the desire for respect and recognition underlying his presidential ambitions.

President Farmaajo currently has the best chance to be re-elected and this of course means the PM has a great prospect to be a Premier for another four years and a likelihood of becoming a Presidential candidate down the line. Therefore, he should be patient and pay his due. It is through falling in line today that he can build a legacy that won’t find him disgraced tomorrow.