From Rivalry to Rapprochement: What’s Behind UAE and Turkey’s Meeting? 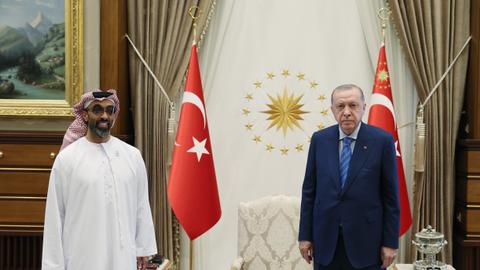 Ankara and Abu Dhabi’s relationship has been shaped and defined by their rivalry for several years. Is it headed in a new direction?

The relations between the two countries in the past several years have been marked by rivalry and tension, particularly in regional politics. However, there have been hints at normalisation for several months, and the visit by Sheikh Tahnoun is the culmination of progressive steps that could lead to a new phase in bilateral relations.

The UAE has been striving to become one of the decisive actors in Middle Eastern politics and has played an active role in many conflict zones to this end. In line with these efforts, the Abu Dhabi administration wanted to create a new regional order by consolidating its military capacity alongside traditional foreign policy tools.

One of the important components of this foreign policy strategy was the prevention of Turkey’s foreign policy engagements, which the UAE considered to be the main obstacle to the establishment of its desired regional political order.

The Abu Dhabi administration, which failed to achieve its goals in Yemen, Libya, and Syria due to its limited political and military capacity, not only lost its relationship of trust with Turkey, but also paved the way for the diminishing of its image in the eyes of the Arab peoples and some of their leadership. The UAE’s normalisation agreement with Israel and its counter-revolutionary policies in Yemen and Libya caused the further antagonisation of popular masses in the region.

Meanwhile, the changing regional and global conjuncture compelled the UAE to re-evaluate its foreign policy and make changes in its relations with Turkey and its policies towards the Arab world. In this context, Turkey no longer stood as one of the priority agendas in the UAE’s foreign policy.

Several reasons can be attributed to this shift: the normalisation efforts between Turkey and Egypt and Qatar and Saudi Arabia; the leadership change in the US; the negative economic effects of Covid-19; and Turkey’s increasing military capacity seem to have played a crucial role in this policy change. Egypt and Saudi Arabia, some of the UAE’s closest allies, changed their policies towards Turkey, which also affected Abu Dhabi’s attitude towards Ankara.

Recent constructive comments about Turkey by some Emirati figures, who had been conducting smear campaigns against Turkey and are known for their disinformation activities, were considered to be the harbinger of this transformation.

One of these people, Anwar Gargash, then the UAE’s Minister of State for Foreign Affairs, stated in January 2021 that his country does not seek problems with Turkey and that they have the will to normalise relations.

The main concern prompting the UAE to a possible normalisation with Turkey, on the other hand, is the likelihood of Abu Dhabi being further isolated as a byproduct of its aggressive regional strategies.

This process started with the military coup in Egypt in 2013 when the UAE backed the toppling of the legitimate President of Egypt, Mohamed Morsi. In the following period, the UAE continued its counter-revolutionary policies that caused popular masses to suspect the motivations of the Emirati leadership regarding the future of democratic principles in the region.

The blockade of Qatar, led by the UAE and Saudi Arabia, was a clear turning point for most of the actors in the region. As the UAE continued its aggressive and disinterested stance toward Qatar, its regional partners, including Kuwait and Oman, lost confidence in the Emirati leadership and further tried to distance their regional affiliations from Abu Dhabi.

Following Joe Biden’s election as the President of the United States, the UAE and Saudi Arabia were forced to end the blockade, putting them in the position of being rather unreliable partners. The UAE was the clear loser of the Qatar crisis.

On the other hand, the Abu Dhabi administration is experiencing a serious loss of trust with its most important ally in the region, Saudi Arabia. This was most evident in the war in Yemen, where the two countries clashed.  In 2020, Abu Dhabi decided to end its military engagement in Yemen without consulting Saudi Arabia, angering Riyadh. The tension between the two countries gradually increased in the following period, in which Saudi Arabia and the UAE followed divergent policies on many issues.

Meanwhile, the US gradually reduced its political and military engagements in the region, ending its years-long operations. This led its allies, like the UAE, to increasingly distrust Washington, and seek new cooperation opportunities with new regional and global actors. In this context, the UAE, which has improved its relations with countries like Russia and China, felt the need to reconsider its ongoing tensions with Turkey.

At this point, the UAE administration, which sent a delegation to Turkey at an official level, appears to be the party that wants a new expansion in relations with Ankara. Turkey’s successes in its foreign policy engagements in the wider Middle East – from Syria to Nagorno-Karabakh,  have been influential in Abu Dhabi’s reconsideration of the relations. Ankara also helped Libya’s internationally recognised central government against the repetitive attacks of the UAE-backed warlord Khalifa Haftar.

Emirati decision-makers have also been deterred by Turkey’s ability to translate its foreign policy activism in the Horn of Africa, the Balkans and the Caucasus into outputs consistent with its national interests and the gains of its allies.

Although the tendencies of the two parties and their constructive attitudes towards each other are seen as a sign of improvement in relations, it can be said that the parties will want to see more concrete steps in the days ahead.

Despite the initiatives from both sides, it won’t be an easy rapprochement. There has been serious damage done to the relationship. Similar to the case of Emirati relations with Qatar, building trust will take time. The Abu Dhabi administration will have to make serious efforts to convince once-archrivals Turkey and Qatar, to normalise relations.

Ankara expects the UAE, which has become an influential regional actor in recent times due to its confrontational actions toward Turkey, to take concrete initiatives to demonstrate its commitment to normalisation.

On the other hand, Turkey ought to maintain positive relations with the UAE in line with its economic interests, and implement mechanisms that can minimise the emergence of different approaches to regional issues.

The article was originally published on TRT World Website.