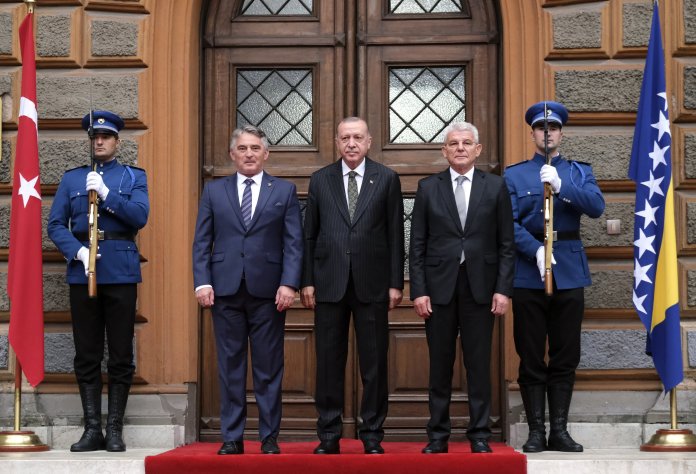 Those folks who put on their ideological glasses before looking at Turkey’s foreign policy cannot interpret new developments accurately.

Sometimes, under the influence of the Western media’s opposition to Turkey’s use of hard power, they use labels such as “adventurism,” “Islamism” and “neo-Ottomanism.” Other times, intimidated by Turkey’s active steps in places like Libya and Nagorno-Karabakh, they ask “what business” the country has there. Finally, they accuse the Turkish government of being a “subcontractor for the imperialists.”

Turkey’s attempts to normalize its relations with Egypt, the United Arab Emirates (UAE) and Saudi Arabia, in turn, were promptly described as a “U-turn.” Needless to say, the main opposition Republican People’s Party (CHP) Chairperson Kemal Kılıçdaroğlu came up with the most romantic statements yet.

Kılıçdaroğlu claims that, if elected, he will send back all asylum seekers with a big party. He also promises to restore peace in the Middle East, instantly, by reaching out to regional powers and Turkey’s neighbors. Those statements do not just target the government. They also create bigger problems, including losing sight of the emerging balance of power in the world and failing to notice the changing realities of Turkey’s neighborhood. They also stop the opposition from making sense of Turkey’s multidirectional foreign policy, which operates on multiple platforms, and from grasping the reasons behind policy changes.

In truth, Turkey has become a global player in recent years. In places where the country uses hard power, Turkey’s activities consolidate its defense industry and trade relations. At the same time, soft power instruments – including the Turkish Cooperation and Coordination Agency (TIKA), the Presidency for Turks Abroad and Related Communities (YTB), the Turkish Radio and Television Corporation (TRT) and the Maarif Foundation – serve to create a permanent foundation for bilateral relations. In this sense, the business community’s investments are also combined with President Recep Tayyip Erdoğan’s foreign policy moves.

One needs to visit those countries to fully appreciate the value and dynamism of that synergy. Interestingly, though, the opposition, which has fully isolated itself within Turkey’s borders, is unable to (or willingly does not) appreciate those developments. Indeed, people in Turkey’s neighborhood realize its new and active role more often than domestic players.

For the record, Turkey’s current role is quite genuine – as opposed to the Western media’s unrealistic references to “the Turkish model” around 2011. With regard to democracy, political stability, economic interests and competition, the country’s new role reflects a realistic experience. Despite turbulence and tensions, that new role emerges out of Turkey’s growing capacity and Erdoğan’s diplomatic experience and hard work.

I personally witnessed that reality during Erdoğan’s most recent trips to Bosnia-Herzegovina and Montenegro. The other obvious case in point is the Bayraktar Akıncı, an unmanned combat aerial vehicle (UCAV).

The Turkish president was keeping an eye on the developments in Afghanistan as he paid a visit to the Balkans that contributed to regional stability. It is no secret that the Balkans and Central Asia have longbeen Turkey’s top foreign policy priorities. In both regions, the country distinguishes itself by promoting stability, brokering talks, making investments and inspiring confidence.

Bosnia-Herzegovina’s territorial integrity rests on the fragile complexity of the Dayton Accords. Its sustainability depends on Russia, the European Union and Turkey – the main heavyweights in the geopolitics of the Balkans. In this regard, Turkey taps into its strong presence in that region to pursue closer relations with Serbia, Croatia and Bosnia-Herzegovina.

Turkey also implements various projects to promote cooperation, such as the Sarajevo-Belgrade expressway, to prevent a return to the bloodshed of the 1990s. That Bosnia’s Serbian and Croatian leaders, too, acknowledged Turkey’s role as the “guarantor of peace and stability” – a role that Erdoğan is prepared to play – highlights the country’s success.

At the same time, Akıncı, which was developed by Baykar Defense, was just accepted into the Turkish Armed Forces’ (TSK) inventory. That new piece of equipment will further improve Turkey’s efficiency in asymmetrical operations. Able to carry up to 1,350 kilograms (2,976 pounds) of ammunition, Akıncı will take Turkey’s fight against terrorism to the next level. After all, it will be able to carry heavy bombs, which had been reserved for warplanes to date.

By using this new drone, Turkey will easily eliminate threats in places where terrorists take shelter such as caves. At the same time, Akıncı will play an important role in ground offensives, thereby extending the life of Turkey’s predator fleet. As such, the country will fully integrate drones into its conventional defense doctrine to increase its level of military activity.

With the addition of Akıncı, Turkey became one of three countries in that particular sector. The country now aims to become a world leader in that area.