Russia-Ukraine war: Could Turkey be the peacemaker? 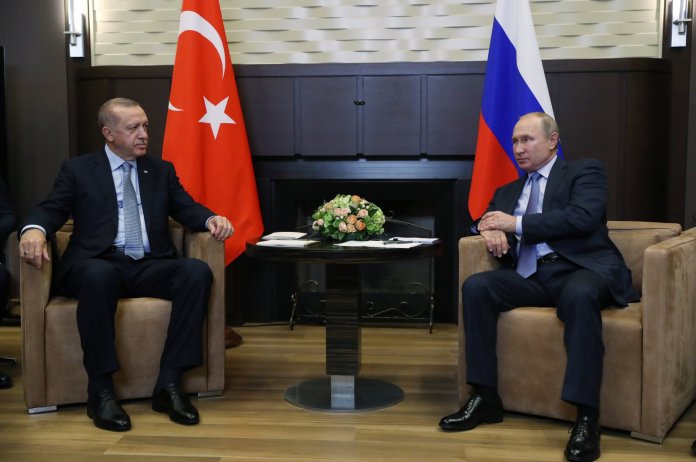 Ankara has deep strategic ties with both countries, positioning itself as a mediator in the ongoing conflict

By invading Ukraine, Russia has challenged regional and global stability, along with the basic tenets of international law. The conflict will shape the power balance in the broader Black Sea region, while also influencing the world order.

Despite Russia’s massive advantage over the Ukrainian army, the advance of its military has been slow, and it has suffered losses. Over the past several weeks, Russian forces have destroyed civilian infrastructure, killed civilians, and caused more than 10 million Ukrainians to flee their homes, according to the United Nations.

Significant international sanctions have been levied in response, including the removal of Russian banks from the Swift global payment system and the closure of European airspace to Russian planes.

As the conflict grinds on, Turkey – as a major regional player and Nato member – could become an increasingly important factor. Turkey has deep strategic and economic ties with both Ukraine and Russia, while the Montreux Convention gives Ankara control over the straits linking the Black and Mediterranean seas.

Amid this backdrop, Turkey has publicly opposed Russia’s aggression in Ukraine, but has not joined western efforts to sanction Moscow. This cautious policy approach gives Turkey space to pursue diplomatic initiatives for mediation, without risking its relations with Russia.

When the war broke out last month, Turkish President Recep Tayyip Erdogan highlighted his country’s deep economic and strategic relations with both Ukraine and Russia, saying it would not be possible to forgo either. He has since called for a ceasefire to restore peace in the Black Sea region, while also criticising the western response to the crisis.

While eschewing broader efforts to punish Russia, Turkey has contributed immensely to Ukraine’s war efforts by providing the country with Bayraktar drones, and has also expressed its commitment to the territorial integrity of Ukraine.

Ankara is aiming to keep diplomatic channels open, while also preserving its economic interests. Turkey’s foreign minister recently visited both Russia and Ukraine, saying this week that the two sides were “close to an agreement”. While a peaceful resolution might not actually be imminent, Turkey has contributed to the negotiating process.

At the same time, Turkey has taken a neutral stance on the passage of ships through its straits; rather than targeting just Russia and Ukraine, Turkey warned the warships of all countries not to pass through the straits.

Turkey’s independent and active foreign policy marks a shift from Ankara’s past close engagement with its western allies, especially on regional security issues. This comes as US influence has been diminishing in the Middle East, while Russian influence has been rising, including in Syria.

It also comes in the wake of the 2016 failed coup attempt, which marked a critical juncture for Turkey. Since then, Ankara has increasingly taken actions independent of the West, such as in the Libya and Nagorno-Karabakh conflicts.

Also important in the current context are Ankara’s economic ties with Moscow. Russia provides a third of Turkey’s natural gas, millions of Russian tourists visit Turkey each year, and it has made a $20bn commitment to Turkey’s first nuclear power plant. Turkey has also purchased the S-400 missile defence system from Russia, at the expense of US sanctions.

Turkey’s close engagement with Russia has enabled it to conduct multiple military operations in northern Syria, while both countries have contributed to diplomacy and the implementation of a ceasefire in Nagorno-Karabakh.

At this stage, a shift in Turkey’s stance is unlikely, barring a dramatic change in Russia’s security orientation or a grand proposal from the West to Turkey. For its part, Russia is unlikely to admit defeat or step back from the Ukraine conflict anytime soon as Russian officials continue to emphasise the need for “neutrality” and “demilitarisation” in the neighbouring state.

The US, a key factor in Turkey’s calculations, has not made any decisive efforts to influence Turkey’s policy vis-a-vis Ukraine, expressing “appreciation” for Ankara’s diplomacy. While it remains unclear as to whether these efforts will ultimately bear fruit, Turkey is in a key position to help restore peace.

The article was originally published on Middle East Eye Website