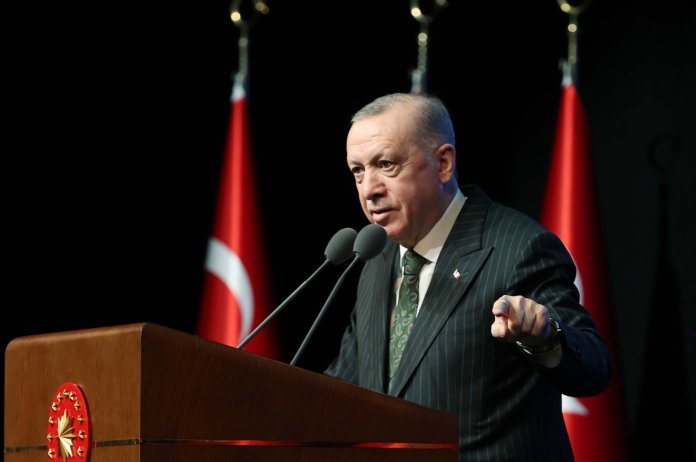 Turkey has played a major role in the search for an end to the Ukraine war as the host for this week’s talks between Moscow and Kyiv – the product of an ambivalent stance experts say is largely rooted in the troubled Turkish economy’s deep links to both countries.

Weeks before Russia and Ukraine agreed on Istanbul as the site for the March 28-30 peace talks, President Recep Tayyip Erdogan made Turkey’s equivocal position clear, saying “we cannot give up” on either nation the day before Russia invaded.

Ankara has stayed true to this approach. The Turkish foreign ministry called the invasion “unacceptable” and a “grave violation of international law” when it began on February 24. Four days later Turkey followed Ukraine’s request to recognise the conflict as a war, allowing it to close the Bosphorus and Dardanelles straits to most warships under the 1936 Montreux Convention.

However, Turkey also opposes the Western sanctions imposed on Russia – with Foreign Minister Mevlut Cavusoglu emphasising that Russian oligarchs are “of course” welcome in Turkey and free to do business there in accordance with international law.

These statements exemplify Turkey’s distinct position on the conflict – “pro-Ukrainian” but “not outright anti-Russian”, as summarised by Ozgur Unluhisarcikli, director of the German Marshall Fund’s Ankara bureau, in an interview with FRANCE 24.

Turkey’s “economic crisis” is the “most important factor in its calculations”, Howard Eissenstat, a Turkey expert at St. Lawrence University in New York state and the Middle East Institute in Washington DC, put it to FRANCE 24.

The Turkish lira lost 47 percent of its value over the past year, as prices soared by over 54 percent. This 20-year inflation high marked a new nadir in the currency crisis wracking Turkey since 2018, a crisis experts blame on Erdogan’s belief – contrary to all economic evidence – that higher interest rates cause inflation.

Turkey does not want to “antagonise Russia”, Eissenstat noted, because it is “extremely vulnerable to a loss of Russian wheat, gas and oil”.

Russia is in effect a vital trading partner for the beleaguered Turkish economy, providing 45 percent of its natural gas and a colossal 70 percent of its wheat. The latter is an especially high-priority import, seeing as escalating bread prices are a major source of discontent in Turkey. Russia is also Turkey’s biggest source of tourists, with its 4.7 million visitors accounting for 19 percent of all travellers to the country in 2021.

Historically, Turkey and Russia have a track record of antagonising each other, most notably when the clashing geostrategic manoeuvrings of Tsarist Russia and the Ottoman Empire saw them fight on more than 10 occasions from the sixteenth century to the twentieth century. At the outset of the Cold War, Kemalist Turkey’s axiomatic anti-communism and pro-Western ethos prompted it to join NATO and host US nuclear missiles, a major source of Soviet vexation until they were removed after the Cuban Missile Crisis.

The most recent Russo-Turkish diplomatic crisis flared in 2015, when Turkey shot down a Russian jet near the Syrian border. But a formal apology from Erdogan soon ended Moscow’s retaliatory sanctions – inaugurating a rapid thaw in relations that weathered Russia and Turkey backing opposing sides in the Syria, Libya and Nagorno-Karabakh wars. This recent paradigm in Russo-Turkish relations is best described as “competitive co-operation”, the German Marshall Fund’s Unluhisarcikli said, in which supporting rival forces abroad “doesn’t prevent them from cooperating in the fields of energy and trade”.

A year on from that swiftly resolved spat with Russia, a dramatic coup attempt sparked a pervasive crackdown as Ankara held responsible Islamic cleric Fetullah Gulen and his movement. Erdogan’s government felt the West was not supportive enough after this would-be putsch.

Thus the failed coup set the stage for Turkey-Russia ties to deepen, explained Reilly Barry, a Turkey researcher at Harvard University. Following the putsch attempt, Russian President Vladimir Putin “successfully sowed more seeds of doubt into Erdogan’s mind that the West is not his ultimate protector and security assurance, and achieved his desired effect to create a wedge among NATO allies when Turkey purchased the S-400 missile system from Russia, a major red line for a NATO country to cross”, Barry told FRANCE 24. “So, the Turkish government has formulated a stance on seeing Russia as a potential major power protector in cases when Western relations and alliances do not suit Turkey’s best interests.”

In this context, “having been close with Russia and Putin lately more so than at any other time in recent history, it would make Turkey extremely vulnerable to be condemning Russia in the language that the US and Western European countries are”, Barry continued.

“It is also important to remember the US and other countries do not share a sea with Russia and are not only separated by one other country [Georgia],” she added.

At the same time, Turkey has more extensive economic ties to Ukraine than most of those Western nations. Ukraine supplies 15 percent of Turkey’s all-important wheat imports, making it Turkey’s second-biggest provider. Some 2 million Ukrainians holidayed there last year, making them Turkey’s third-biggest source of tourism.

Turkey’s burgeoning defence sector established major ties with Ukraine before Kyiv’s crisis with Moscow. Ukraine announced last year it was building a factory for the co-production of the Bayraktar TB2 drone – Turkey’s most famous military export, renowned for its effectiveness for Azerbaijan in the Nagorno-Karabakh war and now for Ukraine as it fights Russia. Ukraine has also signed deals to manufacture engines for both forthcoming new models of the TB2 and a forthcoming Turkish military helicopter.

And the drone manufacturer is not just any Turkish private company: Baykar’s Chief Technology Officer Selcuk Bayraktar is Erdogan’s son-in-law.

Turkey’s “longstanding economic interests in Ukraine” mean it “doesn’t see any eventual gain in Russia taking over” the country, Eissenstat said. That explains why Turkey “quietly would like to support Ukraine”, he continued, despite its keenness to avoid alienating Russia.

So far, Ankara’s balancing act between these two demands has preserved decent relations with both sides. Turkey not only hosted this week’s peace talks, it also received the Russian and Ukrainian foreign ministers for trilateral talks earlier in March, before the Turkish foreign minister visited both Kyiv and Moscow.

This shows that Turkey’s need for links to both Russia and Ukraine is far from unrequited, Eissenstat concluded: “Both countries have been willing to play ball with Ankara,” he said. “You don’t see Moscow complaining about the Bayraktars. You don’t see Kyiv complaining about the lack of Turkish sanctions. Both have been fulsome in their praise – and that’s because both want Ankara on their side as much as possible and to prevent it from going to the other side.”

The views expressed in the article are solely the opinion of the writer. The veracity of any claims made are the responsibility of the author not Jamhuriyadda.  The article was originally published on France24 Website.