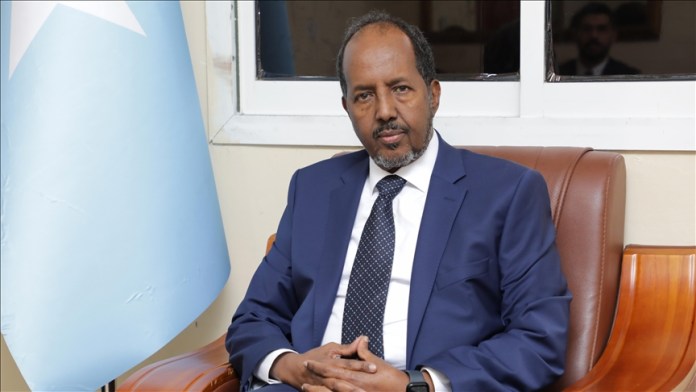 By Mohammed Dhaysane and Tufan Aktas

The president-elect. In an exclusive interview with Anadolu Agency, says Turkiye has a unique position in Somalia

Somalia’s new president Hassan Sheikh Mohamud, who spoke exclusively to Anadolu Agency in his first-ever international interview, said that Turkiye has touched the hearts of minds of Somali people due to its tangible and visible impact in Somalia.

Mohamud was elected by Somalia’s members of parliament on Sunday in the capital Mogadishu, defeating the outgoing president Mohamed Abdullahi Mohamed, known as Farmajo, who said the Turkish people and its government has a lot of impact on Somalia.

“As I said, the Turkish people and the government of Turkey have a lot of impact on Somali people. The support of Turkiye has touched the hearts and minds of Somali people and this support was very visible and tangible and saved many many lives throughout Somalia,” the new president told Anadolu Agency in the capital Mogadishu.

He said Turkiye supports the human capital of Somalia by providing education from schooling all the way to universities.

“Turkiye provides very competent security officers by training not only in Turkiye but here in Somalia and equipping, providing all necessary tools to implement what they have learned in Turkiye,” he said.

He added that Turkiye has a “very unique position towards the hearts of Somalia.”

‘Most challenging issue in Somalia is security’

Touching on his priority, President Mohamud said: “Today, the most challenging issue in Somalia is the security.”

He said the fight against Al Shabab, the terror group that emerged with the collapse of the Islamic Courts Union that was established after the civil war, will continue.

Mohamud said that despite all the steps taken for the welfare of the people, Somalia could not achieve the success he had hoped for in this area.

Promising to listen to all segments of Somali society, Mohamud said they wanted to open the political space, which was narrowed and closed in recent years.

He said: “It is all about, again, moving forward about the reconciliation, not the social reconciliation but the political reconciliation. Putting the contentious issues in place and asking the people to discuss freely and fair.”

“And all these must be an agenda that consensually agreed among Somali people,” he added.

Noting that the African Union forces have done a lot for Somalia and they have sustained significant casualties, Mohamud said that after the step-by-step construction of the security system in the country, a security transfer will be possible in a short time.

A statement issued by the Turkish Foreign Ministry said that it was pleasing to see that the presidential elections in Somalia held on Sunday have been completed successfully.

“We congratulate H.E Hassan Sheikh Mohamud and wish him success during his tenure,” the Turkish Foreign Ministry said.

“We attach great importance to the peace and stability of Somalia, with which we have deep-rooted historical ties, and hope that the results of the elections will be auspicious for the friendly and brotherly people of Somalia,” it added.

“Turkiye will continue to stand by the people of Somalia and to support the Federal Government of Somalia to establish security, stability, and prosperity in the country in this new period.”

The views expressed in the article are solely the opinion of the writer. The veracity of any claims made are the responsibility of the author not Wargeyska Jamhuriyadda. The article was originally published on Anadolu Agency Website.