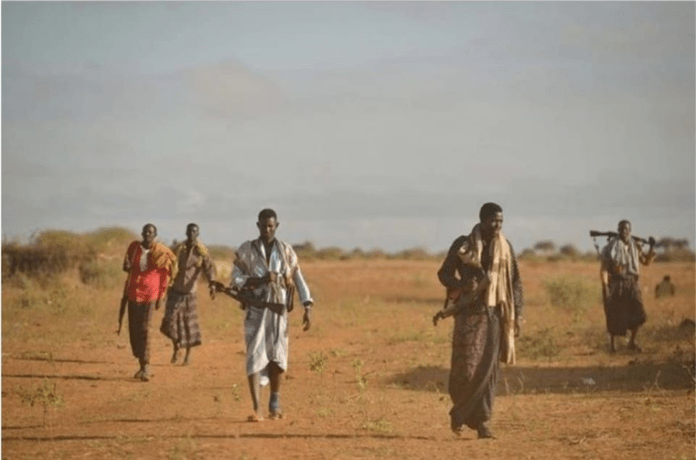 In a country that is never short of hot button issues, lately the Ma’wisley issue has been stirring the strongest emotions and widely broadening the political division among the Somali people since 1991.

Within the past few months, al-Shabaab has committed bold terrorist attacks utilizing explosives and targeted massacres in Hirshabelle, Galmudug, and South West federal states. All these Somalia federal states happen to share border(s) with Ethiopia. Moreover, these three also share another more intriguing common denominator: random formation of local vigilante groups known as Ma’wisley who have sworn to eradicate al-Shabaab.

Though the issue reeks of clan sentiments, Somalis who are in favor and those against often hide behind a thinly-veiled arguments of ‘right to self-defense’ and ‘nationalism.’ Supporters of the current Somali President, Hassan Sheikh Mohamud, consider the Ma’wisley indigenous heroes who are aiding the current government to defeat al-Shabaab. On the other hand, supporters of the former President, Mohamed Abdullahi Farmajo, consider them a treasonous militia that aided an opposition group determined to prevent Farmajo’s term extension plan to reach its objective.

So, in order to fairly assess the benefits and the liabilities that come with Ma’wisley, I will try to ignore these toxic perceptual paradigms and take a look at similar adventurism in the past.

Ignorance is not lack of knowledge about the world around us and motives of the actors that propel the political locomotive that shape our perceptions. Real ignorance is to embrace uncritically everything that media, academia, and governments try to feed us without any attempt to sift through with critical thinking.

Somali Defence Minister, Abdulkadir Mohamed Nur and the Somali National Army Chief, (30+ year) General Odowaa Yusuf Rage recently visited the Hiiraan region to reaffirm the current government’s solidarity [with the Ma’wisley vigilante.] Any reasonable person who cares about Somalia’s national interest would ask: Why not recruit these militia members to officially join the national army and bring them under that command? Why risk being perceived as tipping clan balance of power, a perception that could easily ignite inter-clan hostilities and violence down the road?

Puntland Security Forces—the original and more sophisticated model—was established as a private army by Saracen International which was the infamous Erik Prince’s first East Africa mercenary project for the lucrative illegal mining. In 2011, due to a rogue expose that unveiled Saracen’s true nature and employment of remnants of apartheid South Africa’s torturers. The subsequent political and international media pressure compelled the transitional President, Sharif Sheikh Ahmed, and his Prime Minister, Mohamed Abdullahi Farmajo, to immediately cut off ties with the mercenary group. However, Abdirahman Mohamud Farole who was then President of Puntland opted to defiantly host that mercenary group. They duplicated that with Himan and Heeb private anti-piracy militia led by Mohamed Adam Tiicey.

Following that same model and relying on regional or federal-state leaders who are eager to risk their nation for personal or clan gain, Ethiopia and Kenya have established a number of militia groups to be the conduit for their military strategic objectives- establishing buffer zones inside Somalia. The most notorious among those militias were:

The Azania Drawiish led by late Professor Mohamed Abdi Mohamed (Gaandi) which gradually morphed into the Jubbaland force, and the Ahlu Sunnah Wal Jama’a led by late General Mohamed Nur Galaal. Each was designed to fight al-Shabaab and spearhead a zero-sum challenge against the central government. And the rest is history.

The same kinds of clan-motivated politicians, corrupt profiteers, front-line states, and narrative-crafters in Nairobi and Mogadishu, and so-called terrorism experts are all cheerleading for the Ma’wisley. These and their recruited ‘influencers’ and youthful credulous masses in social media have been ferociously attacking anyone who dares to scrutinize the official narrative. This author is one of the people labeled as “Shabaab supporter.” It is unfortunate how clannist societies rarely learn from the past.

The locals whose families and community members were savagely massacred and their properties, including water wells, were destroyed have every legal and moral right to defend themselves by any means necessary. That said, from the psychological perspective, such traumatized victims do not care about the optics currently saturating the conventional and social media platforms nor do they care if they were called Ma’wisley (the male skirt-wearing) or Da’asley (the flip flop- wearing). However, to those foreign and local actors who have been stage-managing this saga, the name does matter. It is a priceless dog-whistle.

Sustained emotional discussion on the Ma’wisley issue is the most effective way of cementing the single factor narrative (al-Shabaab) in people’s psyche. And that in turn creates collective passivity, false sense of security, and a priceless cover for all other actors (foreign and domestic) who are engaging in various elicit and zero-sum games. The more sensationalized the story, the more effective distraction it will be.

Originally, the organized indigenous vigilante is believed to have been started spontaneously back in 2018. Be that as it may, Ma’wisley has attracted others with ulterior motives (clans, foreign governments, mercenaries & narrative merchants, etc.) One does not have to be a counterintelligence expert to prove that. Optics certainly tells volumes of stories. The most iconic of said optics being a local traditional leader who is immaculately dressed for the occasion and is heavily armed with combat weapons, including automatic hand-gun in a finely designed holster- something that is known to be mercenaries’ favorite. Remember, this whole drama was unfolding in remote rural areas along the Ethiopia/Somalia border. This not in any way suggesting that the cultural elder is in cahoots, but to underscore the likelihood that he was likely duped by someone whom he probably  trusted.

There are two facts that cannot be denied here: First: al-Shabaab is a terrorist organization whose long bloody trail crisscrosses throughout Somalia. And, despite their puritanical intolerance and extreme violence aimed to terrorize people into submission, there is a method to their madness.

The recent massacres in Hirshabelle that is symbolized by the Mahas 21 certainly raise many questions. Though I have not been to Mahas, it is roughly 30 miles away of Beled weyne where I was born.

Anyone who is familiar with the Somali cultural norms and rural settlement preferences knows that remote villages are almost always inhabited by specific sub-clans who know each other more thoroughly than necessary. So what strategic appeal might such area have for al-Shabaab?  In our attempt to find answers to these questions, let me hyperlink my recently published analysis on al-Shabaab’s highly coordinated attack on Ethiopia, lest it provides critical context.

By ignoring this and staying the current course is tantamount to inviting Ethiopian forces to settle in that area. The pretext maybe is set for Ethiopia to create a “buffer zone” inside Somalia, and, in due course, annex that territory.

The views expressed in the article are solely the opinion of the writer. The veracity of any claims made are the responsibility of the author not Wargeyska Jamhuriyadda. The article was originally published on The Geopolitics Website.