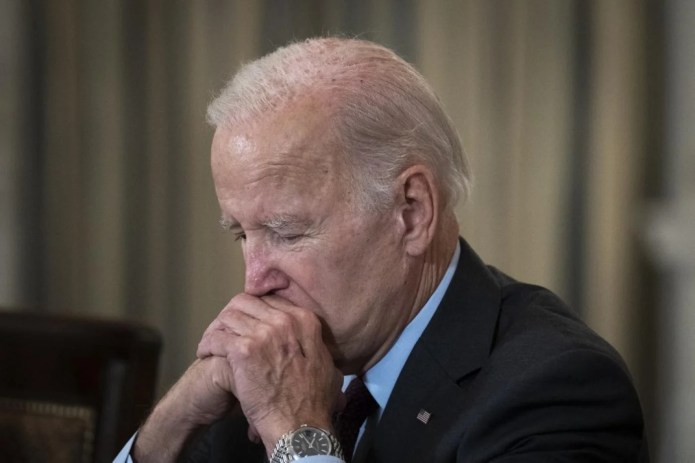 On Wednesday, US President Joe Biden issued his National Security Strategy, which boasted, among other things, of his country’s unique capacity to “defend democracy around the world”.

One of the standout phrases of this unashamed piece of geopolitical fiction was this one: “We are forging creative new ways to work in common cause with partners around issues of shared interest.”

This statement was released just days after Opec+, led by Saudi Arabia and Russia, unleashed the biggest shock to oil markets this century by cutting production by two million barrels a day.

Despite Riyadh’s latest protestations that the decision was based only on “economic considerations”, the move has triggered a tidal wave of anger among Democratic members of Congress, who are now threatening to suspend arms sales to the kingdom for a year. National security adviser Jake Sullivan has also said the White House was looking into a halt to arms sales. As 73 percent of the kingdom’s arms imports come from the US, this is no mere rhetorical threat.

“If it weren’t for our technicians, their airplanes literally wouldn’t fly… We literally are responsible for their entire air force,” Ro Khanna, a Democratic congressman from California, told reporters. “What galls so many of us in Congress is the ingratitude.”

Incidentally, the same is true of the British firm BAE Systems, which supplies and maintains aircraft for Saudi Arabia, but the UK government is staying silent.

It should not. Because the National Security Strategy shows that, among other things, the US has lost control of its allies, especially in the Middle East and particularly in the Gulf.

To take Biden’s tenure as an illustration, one of the first things he did upon taking office was to appoint Brett McGurk, a diplomat who had served under previous presidents, as his National Security Council coordinator for the Middle East.

McGurk is famous, or rather infamous, among Sunni political circles in Iraq – let alone pro-Iran Shia ones – for being rather too close to Mohammed bin Salman, the crown prince of Saudi Arabia and latterly its prime minister. McGurk set up the disastrous “fist bump” encounter between Biden and Mohammed bin Salman by negotiating an agreement between Israel, Saudi Arabia and Egypt over the transfer of two uninhabited but strategically placed islands in the Red Sea, Tiran and Sanafir.

How, then, could Mohammed bin Salman poke such a large finger in Biden’s eye just before the midterm elections, if McGurk had been doing his job? It’s chaos – not in the unstable Middle East, but in the corridors of the National Security Council.

Or take the decisions that Biden made over Jamal Khashoggi, the Saudi journalist and Middle East Eye columnist murdered in the Saudi consulate in Istanbul in 2018. Biden abandoned the principles he touted as a presidential candidate to treat the Saudi crown prince as a pariah, the moment he took office.

Upon the publication of a summary of a CIA report on the murder, which concluded that Mohammed bin Salman had ordered the killing, Biden had an opportunity to put US weight behind a UN investigation into the killing. He notably declined to do so.

The US announced visa restrictions against 76 Saudis implicated in the plot, but did nothing against the man its intelligence services said was behind it.

“The relationship with Saudi Arabia is bigger than any one individual,” Secretary of State Antony Blinken said at the time of the so-called Khashoggi ban. “What we’ve done by the actions that we’ve taken is really not to rupture the relationship, but to recalibrate it to be more in line with our interests and our values.”

Dennis Ross, a former Middle East negotiator, applauded Biden for “trying to thread the needle”, telling the New York Times that the affair was “a classic example of where you have to balance your values and your interests”.

Not unnaturally, Mohammed bin Salman concluded that he had gotten away with it. Now, Biden is paying the price.

The American foreign policy establishment has been, since the end of the Cold War, in a permanent state of surprise.

There was surprise that it had “lost Russia” at the end of the 1990s; surprise at the devastation caused by its invasion of Iraq; surprise over Vladimir Putin’s 2007 Munich speech, in which the Russian leader called out the US’s “almost uncontained hyper use of force in international relations”; surprise at Putin’s intervention in Syria; surprise over the fall of Kabul; and surprise that strategic decisions such as expanding Nato eastwards would ultimately lead to Putin’s invasion of Ukraine.

A world power that, until Putin’s intervention in Syria, held a monopoly on the use of international force but has squandered its authority in a series of mainly unforced errors. That is why it can no longer lead the democracies of the world.

Alienating China at the very time the US needs President Xi Jinping to contain Putin and stop him from using battlefield nukes, which he is quite capable of doing, is perhaps the biggest strategic mistake it is currently making.

At least the US is showing admirable consistency in its faulty analytics and strategy, and massive blind spots. You can now rely on it to make the wrong choice.

But what of its wayward allies, Saudi Arabia and the United Arab Emirates?

Saudi foreign policy cannot be untangled from the personality of its de facto ruler, Mohammed bin Salman. He is to international relations what a Nintendo game console is to careful reflection. He presses a button and thinks it can happen. He has an idea, and it has to be true.

I recently met an academic in Tehran who believed Mohammed bin Salman had moved beyond his Game Boy past. He is involved in backchannel negotiations with the Saudis.

“A senior Saudi diplomat told me that MBS started as a kid playing video games,” he told me. “Killing Khashoggi, starting a military intervention in Yemen which would last ‘two weeks’, the siege of Qatar, getting rid of [Lebanese Prime Minister Saad] Hariri were all video games for him, buttons you can press, enemies disappearing from the screen. Out of necessity, he is becoming more strategic.

“Strategic maturity does not come from what you would like to have. It comes out of necessity,” the academic added. “I don’t think the Saudis decided to move beyond that strategic relationship with America. The American hand is still strong. But there are differences happening. The Americans are not seen with the same confidence that was seen in Riyadh.

“Where does it leave the Saudis? The Saudis have been trying to build relations with China and Russia and in the region. Vision 2030 cannot move without calm all around the kingdom. The Saudis see Yemen in two tracks: one, the Saudi-Yemeni track [with the Houthis]; two, the national reconciliation track. But the two rely on each other, and MBS is moving towards a compromise.”

The Iranian academic admitted that this was music to his ears, which was why he thought his Saudi counterpart was playing it, but nor could he discount the temptation to believe it.

Mohammed bin Salman admires Putin personally. Multiple sources have told me that the inspiration for the Tiger Squad – which killed and dismembered the body of Khashoggi and tried to do the same to Saad al-Jabri, a former minister of state and adviser to deposed crown prince Mohammed bin Nayef – came from the killing of former Russian agent Alexander Litvinenko in London and the attempted poisoning of defector Sergei Skripal in Salisbury.

But beyond that, Mohammed bin Salman sees the limits of the kingdom’s ties to the US. He used former President Donald Trump as his ticket to the top of the Saudi royal family, but now that the Trump clan is – for the moment – out of power, he sees no reason not to court Russia.

But he remains impulsive, and his tutor in the modern art of Machiavelli, UAE President Mohammed bin Zayed, is more astute.

In distinction to his pupil, Mohammed bin Zayed still sees his country’s growing trade alliance with Israel as his ticket to influencing US policymakers. It was his ambassador in the US, Yousef al-Otaiba – not the Saudi ambassador – who introduced Mohammed bin Salman to the Trump family and to Washington.

But Mohammed bin Zayed hates being told what to do. One official familiar with relations between the Saudi and Emirati crown princes told me of a plan Mohammed bin Salman once had to run a maglev railway around the Gulf. Only a few of these systems, such as the Shanghai Transrapid, are running in the world, due to the enormous cost of construction.

“MBS makes a plan and tells everyone else how much to invest without consulting them,” the official said. “He had an idea to run a maglev train going around the Gulf. Its [cost] was $160bn, because it’s $1bn a mile. Abu Dhabi’s share was huge. They were furious and stopped the plan.

“MBZ resents being told what to do by MBS, because he thinks he created him. MBS could not conceive of a relationship to him where he is subservient.”

So while Mohammed bin Zayed went to Russia courting Putin, his officials distanced themselves from the Opec+ oil cut. The Financial Times reported that the UAE and Iraq had “expressed misgivings”.

Foreign policy in the hands of Mohammed bin Zayed is more nuanced than in those of his Saudi protege. This means that every move Mohammed bin Zayed makes is reversible, and therefore tradeable. He calculates each move before he makes it.

It happened once over Yemen, where the announcement of the pullout of UAE troops left the Saudi crown prince on his own.

Biden and his advisers may be tempted to take a successful pushback of Russian troops in Ukraine as a starting gun for a new era of American power projection around the world – one whose target is China. But even if Putin is turned back in Ukraine, they would be profoundly wrong to do so.

The US is being tested as much by its allies as by its foes. And for good reason: they sense that the US won’t resume the role of unchallenged leader, which it held briefly for three decades.

The US has learned no lessons from the fall of Kabul. It reacted to its military defeat in Afghanistan by trading up. A geographically limited conflict in Central Asia was replaced by a potentially much larger conflict with China. Large parts of the world have rightly lost faith in this type of leadership.

The Three Geopolitical Traps Set by the US

By Mehmet Akif Uslu The U.S. has set three geopolitical traps around the world that ultimately aim to...
Read more