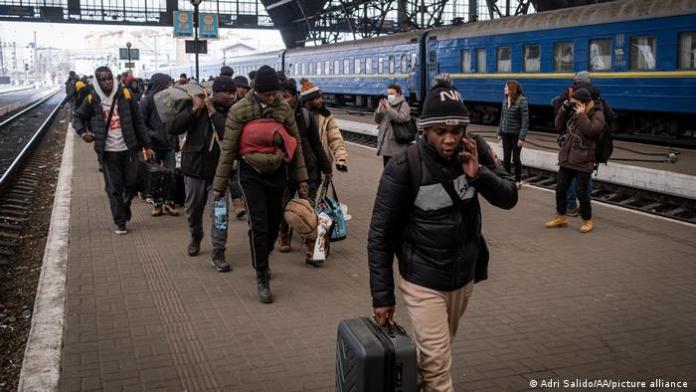 African students who have fled the war in Ukraine say the racism they face is making a bad situation worse. DW’s Tobore Ovuorie has kept in touch with several of them as they go about seeking refuge in Europe.

At dawn on February 24, Olufunmilola Bamidele found 40 missed calls and numerous voice messages on her phone.

The 33-year-old Nigerian postgraduate student at the Dnipro Medical Institute in Ukraine had wrapped up her studies and gone to bed just hours earlier.

The calls were from relatives in Nigeria, worried about her safety because Russia had invaded Ukraine.

“If I didn’t wake up to use the restroom, I wouldn’t have seen these because I would have probably woken up around 7 a.m. or 7:30 a.m.,” Bamidele told DW.

News sites were reporting explosions in Ukraine’s capital, Kyiv, and in Kharkiv. Explosions had also been heard in Dnipro, which lies between the two cities.

Bamidele initially wanted to stay put in her home of the past six years.

“I was like: I am going to remain here since this city is still calm and there is nothing going on. So, definitely, maybe, we would just be safe till the end of it,” she said.

But her parents in Nigeria ordered her to leave Ukraine.

On February 28, Bamidele set off for the train station. She told DW that she wanted to see if it was true that foreigners were not being allowed on outbound trains. Media reports about stranded African, Indian and Arab students were going viral.

“I just wanted to see what was going on because I was hearing on the news that they were not allowing foreigners to enter the trains,” she said.

“When I got there, there were a lot of people. I met some people who said they had been there for 12 hours and they were not allowed to enter the train.”

She said that she saw a person of color smash a train window and a fight break out.

The scramble for any bus

The next day, Bamidele returned to the train station and found some of the foreigners she had seen the previous day still waiting. There were only two trains per day bound for Lviv, not far from the Polish border.

Bamidele realized that she had to leave immediately. A day before the city was shut down, she scoured the bus stations for a way out and met a woman who could get her on to a private bus.

Hours later, Bamidele, five other Dnipro Medical Institute students from Nigeria and 44 others boarded a 50-seater bus bound for the border.

The six Nigerian students did not want to travel to the Romanian border but that was where the bus was heading.

“So, when we got to a city that was close to Romania after 24 hours, it was a very hectic journey for us because we needed to stop at every checkpoint and there were a lot of checkpoints,” said Bamidele.

The soldiers, she said, checked everyone to ensure there was no “intruder” on the bus.

The students decided to stay in the Ukrainian city of Chernivtsi until they could figure out which country they would try to reach.

They had to figure out a plan while suffering from hypothermia, said Bamidele. They had also heard about the discrimination and ill treatment being meted out to Africans at Poland’s border.

Hotels and apartments in Chernivtsi were fully booked but the group of students eventually found two very small rooms they could rent.

“That city was cold and the apartment was cold as well. There was nothing we could do. So we were there the first day to see what was going to happen. Maybe there would be another border that would be opening, and we would be going there,” said Bamidele.

A smoother journey to Hungary

By the third day, the cold rooms in Chernivtsi had become unbearable. At the bus station, they bought tickets to Uzhhorod, near Ukraine’s border with Hungary.

The 12-hour trip to Uzhhorod was smoother than the ride to Chernivtsi and there were fewer military checkpoints.

They arrived in Uzhhorod at about 4 a.m. on March 6 and caught a taxi to the city of Chop, where they waited to transfer to a train bound for the Hungarian border. Too tired to wait five more hours for a free train, the students bought tickets for a train departing immediately for Budapest, Hungary’s capital.

On the platforms at the main train station in Budapest, many volunteers were on hand to help those fleeing Ukraine. Bamidele said they distributed toiletries and other basic supplies. Some even opened their homes to those who had nowhere to go.

In Dnipro, Bamidele used to volunteer for Diaspora Relief. In Budapest, a volunteer from the nonprofit organization welcomed the six students and took them to a hostel.

Bamidele’s uncle in Nigeria was not pleased that she was staying in a hostel where men and women were sharing bedrooms and bathrooms. On March 8, she moved to a private one-bedroom apartment he had booked online.

Bamidele volunteered to cook for the students and to help others still trying to reach Hungary.

“I started cooking because I knew that a lot of people hadn’t eaten good food. We had been eating junk. And I knew that while they are in the hostel, they cannot even cook. So, finding myself in a comfortable place, I was like: Let me just cook for other people that don’t have this opportunity,” she said.

Soon Bamidele was cooking for over 300 students. The meals are sponsored by Diaspora Relief.

Bamidele is doing more for African students than cooking because they are going through a rough time in Hungary. Accommodation is hard to find. Apartments need to be booked for four to five nights and check-in is always 4 p.m., while checkout is 10 a.m. The students need somewhere to stay warm in the times in between.

Bamidele is helping people to search for apartments where new arrivals can stay temporarily.

DW asked several of the African students who had made their way to Hungary about their experience. Many said that the owners of Airbnb apartments in Hungary were now refusing to rent to them.

“They are not specific but I think it is Africans,” Bamidele suggested.

African students in Hungary also told DW that Ukrainians who had fled to Hungary were more likely to find private accommodation or stay in refugee camps.

Racism in a refugee camp

A Ghanaian management student who declined to be named said he had left the refugee camp he was placed in after fleeing Sumy in northeastern Ukraine because of  discrimination. He told  DW that a Ukrainian man had complained to camp officials that sleeping beside a black man was traumatizing. The student was then moved to another space within the camp.

“So, hearing that, a lot of people don’t want to stay in a refugee camp. So we just look for Airbnb and some of the NGOs like Diaspora Relief have been paying for food and accommodation,” he said.

Though many African students in Hungary are without stable accommodation, some are still trying to attend the online lectures offered by their universities in Ukraine, while others are taking up the language classes offered by the government of Hungary.

Olufunmilola Bamidele told DW she would stay in Budapest for now. But she is planning to travel to Ireland, which she has heard is open to Africans who left Ukraine.

The views expressed in the article are solely the opinion of the writer. The veracity of any claims made are the responsibility of the author not Jamhuriyadda.  The article was originally published on DW Website.